OU News
You are at:Home»Around the OU»University news»“The single greatest gift that study gave me was hope” – how the OU changes prisoners’ lives

“The single greatest gift that OU study gave me was hope” says John, an ex-offender who spent six years in prison.

And Stephen, jailed for importing drugs, says that starting with the OU was “a seminal moment in my life” – he now works for The Open University.

These inspirational personal stories about the transformative power of education were shared at a special event run by The Open University, the High Sheriff of Buckinghamshire and Milton Keynes College.  Each former prisoner speaking had dramatically changed the course of their life, thanks to The Open University.

“My prized possession in prison were my OU books” 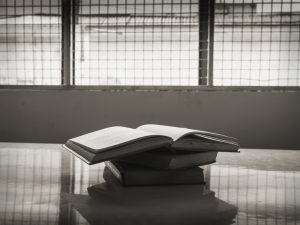 John, serving six years in prison, completed his degree behind bars.  He spoke about how OU study was a welcome relief from the boredom he felt in prison.

John – who is now employed and rebuilding his life – said that learning “massively aids rehabilitation” and that the single greatest gift that OU study gave him was hope.

He added: “My prized possessions in prison were my OU books and I left a lot of stuff behind to carry them very painfully out of that gate. Prison is so very good at suffocating hope but when it becomes a place of learning, then hope is no longer something a prison has control over. With study, you become the source of your own hope and the future becomes a land of good possibilities.”

From a drug trafficker to a first class graduate

First-class OU Law graduate CJ Burge was six months pregnant when she was imprisoned in Japan for drug trafficking offences. After being transferred to the UK to finish her nine-and-a-half-year sentence, she started with the OU.

“What’s so wonderful about studying inside prison is that no matter what happens in your experience there … you walk out with your assignment marks … your grades … the confidence that you’ve been able to do this, and … hopefully with a degree at the end.”

CJ says her OU study not only transformed her prison experience by giving her something to focus on – but it also enabled her to get the job she does today, as SOS+ Project Coordinator at the St Giles Trust and Trustee at the Criminal Justice Alliance.

“Reoffending is not an option for me …”

Stephen Akpabio-Klementowski is an OU staff member, student, and former prisoner, who recently completed a 16-year sentence for importing class A drugs.  Leaving school without qualifications, Stephen was apprehensive about studying as he’d had a negative experience of education in his youth, and expected the same again in prison.

After performing well in his assessments and level 1 and 2 qualifications in prison, Stephen was offered the opportunity to study with the OU. “In my wildest dreams, I never expected that I was capable of going to university. It went against everything I had been told,” he said. “I decided to study towards a social sciences qualification. This proved to be a seminal moment in my life.”

He went on to gain his Social Sciences degree with the OU, followed by two Masters degrees and now, he is an OU employee, working as Regional Manager, Students in a Secure Learning Environment.

Stephen spoke passionately about the importance of education in rehabilitating prisoners: “I believe my learning journey, which was only made possible by the Open University’s ethos and philosophy of open access, will enable me to continue to make a positive contribution to society. I wish to see other prisoners benefit from engaging fully with higher education. I thank the Open University for doing what they alone do best, widening access and participation to higher education, which in my case means facilitating the successful reintegration of prisoners back into society.”

You can watch the event in full on YouTube:

Read about how the OU supports students in secure environments.