OU News
You are at:Home»Around the OU»University news»The Open University: Building a better future for its students

The Open University is entering a new era of innovation to “reinvent the future of learning”, its Vice-Chancellor has said. 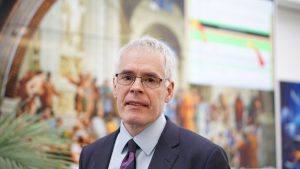 In an interview on BBC Radio 4’s Today programme, Peter Horrocks said the OU was gearing up for a major investment in building better services for students to the benefit of wider society.

The Open University has announced that it plans to achieve savings of £100 million from its annual £400 million budget. Mr Horrocks said that around £70 million of that money would be poured back into shaping the University for the future. The remainder would help correct a looming deficit caused by the dramatic fall in part-time student numbers which has followed the 2012 funding changes in England.

The world of the workplace and the world of learning are changing in an unparalleled fashion. The Open University no longer receives direct funding [in England]– or only a very small amount of it – so in order to ensure The Open University can preserve its openness, its social inclusiveness, its brilliant innovation and its care for its students and its staff, we need to change.

“The competition we are facing is from the massive American technology giants, organisations like Facebook, with a commercial motivation. We have a socially progressive motivation. We want to help Britain survive the changes that are going to happen in the workplace.”

Mr Horrocks said he understood concerns among University staff about the scale of change but the changes were the “right thing” for both the University and British society.

And we are going to innovate as The Open University has done for 50 years, for the benefit of British society.

Mr Horrocks continued: “One of the really interesting things that is happening with learning, which is challenging but also exciting, is that learning is becoming a linked social experience. People, especially adults already in the workplace, are learning from each other in work and increasingly also in universities. So that wonderful, exciting world of people being able to learn from each other, from people in other countries, from people in similar workplaces – we can create that learning environment. Add to that the fantastic research and the brilliant caring skills of our University tutors, we are reinventing the future of learning. That is going to help transform British society in a positive way.

This is about collaborative, shared social learning that is good for students and good for the future of our society. And The Open University is leading the way in Britain and the world. That is what this is about – an exciting, positive change for British society.

The University is working on detailed proposals to transform every area of its operations – from its core curriculum to the way it teaches – and is due to unveil firm plans later this year.

Following reports in the media about curriculum changes, the OU has clarified that it will continue to offer a broad curriculum, including undergraduate degrees in areas such as science, business, music and Classics.  The OU expects the number of existing students to be affected by the review to be very low.

In addition, if a student is affected by the changes, then they will be able to either complete their course within a reasonable time frame, transfer to a mutually agreed alternative or cancel their registration before their module starts.