OU News
You are at:Home»Around the OU»University news»Sarah Brown and Sally Magnusson among those honoured at Edinburgh ceremony

Global campaigner Sarah Brown and broadcaster and author Sally Magnusson were among those receiving awards at Open University (OU) degree ceremony in Edinburgh. Their awards were conferred alongside 560 graduating students and fellow honorary graduates Tessa Ransford OBE (posthumously), poet and founding director of the Scottish Poetry Library and Tommy Whitelaw, dementia and care campaigner and Project Engagement Lead at the ALLIANCE.

The 560 graduates having their degrees conferred came from all over Scotland and beyond. Many of today’s graduates have fitted their study around work or family commitments; some have a disability or live in a remote or rural community; while others lacked traditional university qualifications or come from low-income households.

Seven graduates earned their degrees through The OU’s innovative ‘campus-based’ partnership with several of Scotland’s colleges, which allows college students to transfer credit from Higher National qualifications into an OU degree and complete their degree study at their original college.
Susan Stewart, Director of The Open University in Scotland, said:

“Our inspirational students work incredibly hard to fit learning into their lives, proving that part-time higher education makes a meaningful difference to individuals, families and communities.
“The exceptional calibre of honorary graduates at this ceremony shows how highly our students, and the many colleagues who teach and support them, are regarded. It’s a pleasure and a privilege to welcome them to the Open University family.”

“I am really delighted to receive this honorary degree from The Open University, though given the efforts graduates go to in order to fit their studies into their busy lives around work and family, I feel a tiny bit guilty achieving mine the honorary way! I am surrounded by family, friends and countless acquaintances who have benefited from the flexibility and quality of learning that comes with studying for an Open University degree. It was a genius idea in the first place (thank you, Harold Wilson and Michael Young) but over the years has developed and flourished as quickly as technology has moved forwards – it is almost as though the internet was invented just so that the Open University could reach its full potential.” 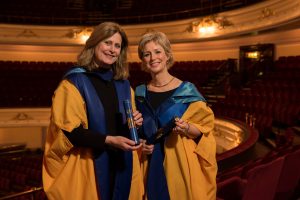 Sally Magnusson, Doctor of the University, said:
“I’m thrilled to receive an honorary degree from the Open University, which provides such wonderful opportunities for everyone – whoever they are and wherever they come from – to unlock their potential and realise their ambitions.”

Roland Stiven, son of Tessa Ransford, Doctor of the University, said:
“University was a personal and intellectual liberation for Tessa, something she valued highly and worked hard to share with others. She was particularly honoured to receive this award because it comes from The Open University, an organisation that embodies the ideas of the democratic intellect and social justice, both of which were woven together throughout her life and work.”

Tommy Whitelaw, Master of the University, said:
“It’s a real privilege to receive this award from The Open University. Arriving home from giving a talk and receiving the letter the day after my late mum’s birthday was particularly special.
“The work I do is based on people and relationships, so I would like to dedicate this to my mum, my friend Irene Oldfather and her mum Margaret, along with my colleagues at the ALLIANCE, including Ian Welsh, and to Joyce Cavaye at The OU for the kind nomination.

“All of us at the ALLIANCE are really looking forward to working with The Open University on how we might improve health and social care.”

Sarah Brown and Sally Magnusson were recognised for their public service, while the awards given to Tessa Ransford and Tommy Whitelaw were for services to the arts and sciences and work in areas of special education concern to The OU respectively. The Open University makes honorary awards in line with its mission to be open to people, places, methods and ideas, and the promotion of social justice through the development of knowledge and skills.