Professor Mary Kellett, the acting Vice-Chancellor of The Open University has thanked Richard Gillingwater for his contributions to the University as his tenure as Pro-Chancellor approaches its end.

“The Pro-Chancellor is a key role for the OU. The Pro-Chancellor also leads the University’s Council providing valuable guidance and oversight. I am grateful to Richard for his immense dedication to the role and all the support he has shown to the OU.” 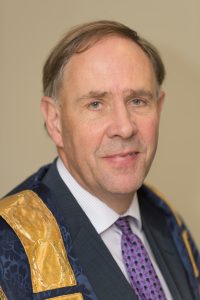 Speaking about his role as Pro-Chancellor, Mr Gillingwater said, “I am an enormous believer in the power of higher education. I was delighted to have the opportunity to become Pro-Chancellor and Chair of Council at The Open University; and to be involved in widening access to higher education in a really fundamental way. It has been a huge privilege to be a part of such an important institution for the last four years.”

As Pro-Chancellor of The Open University, he was responsible for chairing the OU’s governing body, the Council, and sat on the University’s Finance, Membership, Remuneration, Strategic Planning and Resources, and Development Committees. He also played a key role in promoting the University’s external reputation, in influencing major external stakeholders both nationally and internationally and regularly officiating as Presiding Officer at degree ceremonies.

Mr Gillingwater is Chairman of Henderson Global Investors and also acts a non-executive Director for a number of organisations including WM Morrison Supermarkets and Scottish & Southern Energy. He is also a trustee of the Board of the British Council and has previously been Dean of the Cass Business School.