OU News
You are at:Home»Education, languages and health»Education»PCF9: Discussing the future of education and lifelong learning

The opening day of the ninth Pan-Commonwealth Forum saw 520 educational leaders and practitioners from 61 countries unite to discuss and debate the future of education and learning.

Jointly hosted by The Open University and the Commonwealth of Learning, the international conference opened at Murrayfield Stadium in Edinburgh today to focus on Sustainable Development Goal 4, to ensure inclusive education and to promote lifelong learning for all. Key themes throughout the four-day conference, which takes place every three years, are: employability, equity and inclusion, technology and opening education across the Commonwealth.

“We are living at a time of rapid change, in the midst of the fourth industrial revolution and internet of things. We all here have responsibility for the next generations and education is a key part of that.

“The OU was founded on the idea that anyone can study at university and that principle of open access remains the beating heart of the OU today, with 174,000 students each year, 25,000 with a range of disabilities – that alone is the annual population of an average UK university.”

And he stressed the OU would play a key role in the educational challenges ahead.

Lord David Puttnam, former Chancellor of the OU, delivered the Asa Briggs lecture in which he stressed the importance of educational change to ensure a sustainable future in the face of automation. He referred to an urgent and uncomfortable need for change in the sector. “We have so much more to do – we are in the lowlands and the mountain is colossal,” he said. 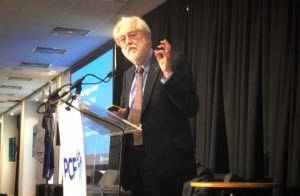 Lord Puttnam referred to the rising rate of automation as a “chilling concept” with 50 per cent of the current workforce expected to be automated by 2030, and up to 375 million displaced workers likely to require new skills. Already, six out of 10 adults are lacking in basic ICT skills required for emerging jobs.

Despite the desperate need, the education world is change resistant, he said. And reminded delegates that the OU was created despite of government support, not because of it. Prime Minister Harold Wilson’s idea of universal access to university education was not a child of government, but battled its way onto the agenda because of the tenacity of Jennie Lee.

He said the same is required now, the “dire need” to change education will have to be forced onto the agenda, in order to tackle the tough realities that lie ahead.

Asha Kanwar, President and CEO of the Commonwealth of Learning, highlighted how unprepared we are for the changes that are afoot. The targets set for sustainable development goal four will not be met by the deadline of 2030, possibly even decades behind in terms of delivery.

“We need to move beyond the business as usual approach and bricks and mortar mindset that learning can only be achieved within the walls of the classroom.”

“The world is facing a learning crisis – even when children are going to school, some of them may not be learning at all. More than half the world’s children are not equipped with skills they need to thrive in a changing and uncertain world,” she added. 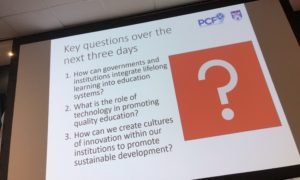 She invited conference attendees to consider three key questions over the course of the conference:

“With automation, bridging the skills divide, equality, diversity, and myriad of challenges facing us, education can help to build a better world. None of the challenges we face impact one country alone.

“Pushing frontiers of technology to reach the widest audience is not a new idea, it’s in the OU’s DNA. For 50 years have focussed on education to ensure that anyone anywhere with the desire to learn can.”

Lord Puttnam, in his lecture, said future solutions could include the concept of a ‘fifth day’ become a reality – a new style working week with four days of work, one of training; the importance of giving people space to share their educational stories; and the huge value of quality teachers.

Both co-host organisations are celebrating milestone birthdays, the OU is 50 this year and COL is 30. The conference will end with the release of an Edinburgh statement – a set of collective actions to achieve progress. In the meantime, the conference can be followed using the hashtag #PCF9.