OU News
You are at:Home»Science, maths, computing and technology»Science»OU team gives go ahead to bring Mars’ moon pieces to Earth

A UK team led by the Open University has given the green light for Mars’ moon material to be transported to Earth as part of a forthcoming mission.

The team, led by the OU’s Dr Manish Patel, a renowned expert on Mars exploration, gave the thumbs up for a new Japanese mission to bring pieces of Mars’ moon back to Earth.

The Japanese space mission is going to Phobos, a moon next door to Mars which is likely to contain material ejected from Mars. Their MMX Martian Moons Explorer Mission – due in the next decade – is planned to land on Phobos, to extract and then return the specimens that they find to Earth.

But space authority COSPAR said before approving the mission, they needed to be confident there was no risk of contamination in the materials brought back to Earth, which could come from organisms containing potential Mars life. 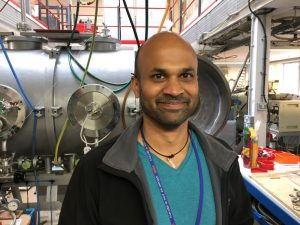 Dr Patel said: “COSPAR is the global committee for planetary protection, who regulate space exploration and they wanted confirmation. We were the independent third party given that task.”

Dr Patel’s research, funded by the European Space Agency, looked at whether unsterilized material from Mars – which might therefore contain life – could be present on Phobos.

Stringent laboratory tests were carried out to determine if micro-organisms could survive the transfer from Mars to Phobos – and therefore still be present when the Phobos extracts were brought to Earth.

“If life exists, or ever existed, on Mars, there is a possibility that material containing organisms could be present on Phobos and be collected by a sample return mission such as the Japanese Martian Moons eXplorer (MMX).”

Given the proximity of Phobos to Mars, Mars’ potential to have supported life, and the possibility of material transfer from Mars to Phobos over millions of years, careful consideration of planetary protection is required, he said.

Dealing with “major unknowns” the OU’s lab-based team had to consider the “best-case scenario” for organism survival, considering the size of sample the MMX mission would bring back. They then measured this against the COSPAR risk-reduction requirement – a probability of less than one in a million – to see whether it would remain compliant and match up with planetary protection rules.

In the lab, the team used simulated or “artificial” samples of Mars and Phobos. They used a gun-like apparatus and a heating apparatus to “shoot and burn” these samples to replicate what would happen if they were thrown through space as a result of meteorite impact. They also did radiation tests to simulate how material on Phobos would be exposed to radiation from space, and combined the results using theoretical models.

They determined that the transfer of life from Mars to Phobos through impact events resulted in a significant amount of unsterilized material on Phobos, but that radiation provides the most significant sterilizing factor on the Phobos surface, and would destroy micro-organisms.

A million to one

The team combined all these tests with statistical modelling to determine the likelihood of unsterilized Mars material being present on Phobos. Summarising the results of the study, Dr Pearson, who led the heat tests at the OU, said: “The chances of anything coming from Mars are a million to one.”

The OU-led team presented their research to the COSPAR panel, which met earlier this year at the United Nations. They used the findings to make a declaration of status and formally classified the mission as unrestricted, giving it clearance.

Speaking about the Japanese missions Dr Patel said: “These missions are incredibly interesting to study the history of Mars, to find out key information and understand how the Mars system has evolved. For instance, we still don’t know the origin of Mars’ moons. So, this is a fantastic area of research to be involved in and will inform our own investigations too.”

The research is published here in the journal Elsevier, Life Sciences in Space Research.

Reference to ExoMars Mission. Dr Patel is co-leading an instrument on the ExoMars Trace Gas Orbiter mission which is looking at the atmosphere of Mars to understand the evolution of the atmosphere and the possibility of life.