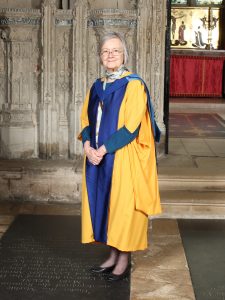 The Right Honorable the Baroness Hale of Richmond, Deputy President of the Supreme Court, received an Honorary Doctorate from The Open University at its degree ceremony in Ely on Saturday, 4 June.

The most senior female judge in UK history, Baroness Hale was nominated for the award as a result of her exceptional contribution to the British judicial system, her efforts in highlighting inequality, and her work in breaking down barriers for female barristers.

Baroness Hale said: “It is a real privilege to be honoured by such a special institution as The Open University, which offers the opportunity of university studies to many who would not otherwise have it. It was truly inspiring to see the diversity of students graduating with me.”
Paul Catley, Head of the Law School at The Open University Business School, presented the honour and said: “What a delight to confer this honorary degree to Baroness Hale. She remains a trailblazer in the legal world and is an inspiration to many, especially women working in the field.  This honour is richly deserved.”

The Open University is the UK’s largest university and a world-leader in high quality distance education.  The Law School has over 6,000 students in the UK and across the globe, and runs the most popular taught undergraduate law degree in the UK.  The law degree is a Qualifying Law Degree approved by the legal professional bodies and is a major innovation in legal education.

The Open University was given its Royal Charter in 1969 and since it opened its virtual doors nearly 2 million people have studied with the OU.