Universities and Science Minister Jo Johnson paid a visit to The Open University on Thursday 29th June to see its award-winning OpenSTEM Labs, which are transforming online teaching and learning.

During a tour of the Walton Hall campus, Mr Johnson learned about the OpenSTEM Labs, an exciting initiative which allows OU students to study science and other STEM (Science, Technology, Engineering, and Mathematics) subjects in a digitally immersive environment.

“Students can see 40 thousand year old signals coming in from space, experience a Mars landscape, see through a slice of rock and look a fruit fly in the eye – all without moving from their workspace” said Open University Vice-Chancellor Peter Horrocks, who also chatted to the Minister about the OU’s own plans for digital and wholesale transformation ahead of its 50th anniversary in 2019.

The OU’s OpenSTEM Labs enable learners to connect online to technical equipment such as microscopes, robots and robotic rovers, telescopes, lab-bench experiments and analytical instruments. The project earned the “outstanding digital innovation of the year” award last week at the coveted leadership and management awards from the sector’s leading magazine. 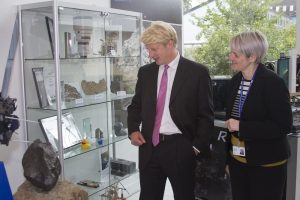 “What the OpenSTEM Labs mean for OU students is that they can study STEM subjects anytime, anywhere. This is not unusual for the OU, but what is really impressive for any university is the level of detail that our students can now access as a result of our pioneering technology,” added Mr Horrocks.

The Minister talked to project director Professor Nick Braithwaite before taking a look at some landmark items of space exploration at the OU including a meteorite and a scale model of the Philae lander, which was part of the successful Rosetta Mission to land on a comet in 2014.

The OpenSTEM Labs project was funded by a £2.8 million grant from the Higher Education Funding Council for England, which was matched by the OU. Several thousand hours of use have already been logged, including a new Masters course in space science.

The project director is Prof Nicholas Braithwaite, who has a long record of OU teaching of engineering, maths and science, and international research profile in plasma physics.