OU News
You are at:Home»Student stories»Julia Gillard honoured by The Open University in Wales

The former Prime Minister of Australia was honoured alongside Welsh graduates at The Open University in Wales degree ceremony in Cardiff.

At the Wales Millennium Centre, former Australian Prime Minister Julia Gillard was presented with an honorary degree from The Open University in Wales for her contribution to public service. Born in Barry, Julia Gillard, Australia’s first female Prime Minister, returned to Wales for one day only to accept this prestigious acknowledgement of her exceptional career.

Accepting the award, the Hon. Julia Gillard AC, OU in Wales Honorary Graduate, said: “I am deeply honoured to receive an honorary doctorate from The Open University in Wales, my home country. The graduates should be immensely proud of their achievements. I hope they thoroughly enjoy this special occasion and I wish each and every one the best of luck for their future.”

Other notables to be honoured at the ceremony included the Art Director of Swansea’s Volcano Theatre, Dr Paul Davies, for his services to the arts. Over the years, this accolade has been accepted by numerous influential people across the country including Radio 1 DJ Huw Stephens, Welsh Poet and Musician Steve Eaves and Director of the Henna Foundation, Shahien Taj OBE.

At the ceremony alongside Ms Gillard were 450 graduates who have shown hard work and determination, often over several years, to achieve their goals. Balancing full time jobs, family and a social life, the graduates have shown complete dedication and commitment to bettering their education.

The Open University delivers distance-learning opportunities to around 7,000 people in Wales, making it the largest provider of part time higher education in the country.

62% of Welsh Open University graduates reported improved pay prospects because of their studies, with a reported economic impact to Wales being £137 million [London School of Economics, 2014].

One of the students to be honoured today, Lauren Oliver OU in Wales English Graduate, started studying with the OU in Wales back in 2011. Originally from Dorset, Lauren worked three jobs as a teaching assistant, in the pub in the evenings and helping on her partner’s farm in Caernarfon. Whilst working and studying, she has also learnt to speak Welsh. Seven years later and after immense hard work, she’s completed her degree and is in the final stages of becoming a qualified teacher.

Lauren Oliver, OU in Wales Graduate, said: “Today’s graduation ceremony was amazing! When I left school, I didn’t know what I wanted to do with my career. The O 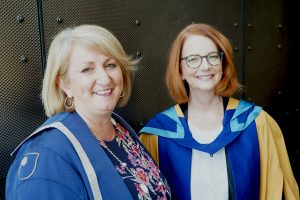 U allowed me to work part time in a school, work on my partners farm in North Wales and study. Thanks to this degree, I am now training to become a qualified teacher.”

Louise Casella, Director of the OU in Wales, said: “Graduation day is special for everyone. Not only for the graduates who have worked so hard, but for the family, friends and colleagues that have supported them too.

“Graduates from the OU in Wales have often got full time jobs or families to support. Our mission is to make education accessible and flexible for all, so that people can balance their lives alongside their studies and we’re so excited to be celebrating with our graduates today”