OU News
You are at:Home»Student stories»“Online study worked for me – I doubled my salary” 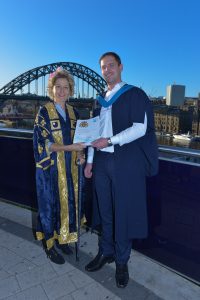 Chancellor of the OU, Martha Lane Fox and Ryan Peddie

Five years ago, Ryan Peddie from Newcastle was working as an IT Manager – but when his company started to face financial difficulties and approached a stage of restructuring he realised his job could be in jeopardy.

He took stock of his career and decided to shift his horizons and ambitions into a career in finance.  Self-motivation played a great part in Ryan’s story as he embarked on a Foundation Degree in Financial Services with The Open University – his last study experience was 17 years previously when he’d taken a HNC qualification in IT.

Initially Ryan funded his own studies, and secured a transfer into his company’s finance office. This is where his newly found knowledge and the resources from the OU really started to make an impact:

The financial state of my company at the time I started studying gave me lots of practical challenges to work through. All of the course materials I was learning were so relevant and applicable, and I could use my new skills straight away.

As the course progressed Ryan’s new knowledge brought great benefit to the company and their fortunes improved to the point where they now have a £7million turnover – and Ryan is the Finance Director.

“Online study worked for me”

Ryan says the OU study method really worked for him, as someone working with a young family.

“I liked the face to face tutorials but really, online study worked so well for me. It was so flexible that it meant I could study when it suited me. There were lots of times when I was burning the midnight oil, and trying to squeeze it in amongst work and other family commitments. But it was worth it – I feel it’s a great achievement personally and professionally to have changed my career, completed my degree and gained promotion to my current position.”

In recognition of his achievement Ryan received the Richard Delbridge Prize which is given by The Open University to the best student of that year’s Foundation Degree in Financial Services.