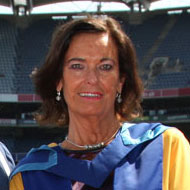 Sheila Coleman, a leading member of the Hillsborough Justice Campaign, has been awarded an honorary doctorate from The Open University.

The honour comes shortly after an inquest into the disaster concluded that the 96 fans who died as a result of a crush in 1989 were unlawfully killed.  Recognised by the university for her contribution to public service, Sheila has been closely involved in the campaign to seek justice for the fans and their families.

It is fitting that Sheila accepted her degree of Honorary Doctor of the University at a degree ceremony last week in Dublin. Although she grew up in Liverpool, Sheila’s maternal grandparents were born and lived in Dublin and were married in St Andrew’s Church in Westland Row, near Trinity College. She comes from a Liverpool-Irish family, retaining a close affinity with the city and is a regular visitor.

Throughout my life and my career, I have learned that adversity takes many forms – but so does success, and the obstacles life throws at us shouldn’t be a barrier to achieving our goals.

“My own university career involved juggling my studies with being a single parent and overcoming a number of personal challenges and losses. It will be a particular privilege to be awarded my degree alongside hundreds of students who have had to fit their studies around their lives.  It feels like an OU degree has an extra little stamp on it because of the extra effort required, and I am looking forward to joining the rest of the students in celebrating their successes.”

John D’Arcy, Director of The Open University in Ireland, said: “Honouring Sheila Coleman today alongside our graduates makes this ceremony an extra special occasion. The Open University makes honorary awards in line with its mission to be open to people, places, methods and ideas, and the promotion of social justice through the development of knowledge and skills.

“Sheila has displayed these qualities throughout her tireless campaigning on behalf of the Hillsborough families, and indeed her own commitment to learning, despite the odds. It is a pleasure to welcome her to The Open University family.”