OU News
You are at:Home»Around the OU»University news»Tributes to Gary Slapper, the first Head of the Law School at The Open University

“Part of his dedicated mission as Head of Law at The Open University was to inspire wider public interest in legal scholarship, and to enhance social access to the law. He will be greatly missed by colleagues, students and the wider academic and legal worlds. Our thoughts are with his family and friends.”

Professor Slapper was educated at University College London and went on to study his doctorate at the London School of Economics. He was a Door Tenant at 36 Bedford Row, the Chambers of Frances Oldham QC, and was a member of the Society of Legal Scholars. He was a Senior Academic on the Bar Standards Board’s Education and training Committee and a Visiting Professor at the
Chinese University of Hong Kong.

Gary wrote and co-wrote many law books and published a wide range of academic journal papers. His research into corporate crime was pioneering and in the foreword to his book Blood in the Bank, the philosopher and writer Noam Chomsky described his work as ‘pathbreaking’. Other books include How the Law Works, and The English Legal System which influenced legal education and is described as “a law student staple”. The work English Law written with Dr David Kelly, was the first work of its kind in the UK to use a companion internet site to keep its readers informed of any changes to the law that occurred after publication of the book. Read more about Gary’s publications and research interests.

Columnist for The Times

Gary had written for The Times for many years, producing legal articles and his own ‘Weird Cases’ column, in which he explored unusual cases, opened up the machinations of the legal system, and in his own unique way informed and entertained many.

The newspaper carried a fitting obituary to Professor Slapper calling him “a one-off”. Obit writers Frances Gibb and Jonathan Ames wrote that Prof Slapper was: “Equally at home discussing the constitutional niceties of Brexit or the law of corporate liability as with popular culture – from the Simpsons to Making a Murderer – he was passionate about knowledge and endlessly curious.”

Professor Slapper also enjoyed a large following on Twitter, amusing and informing many with his witty updates. Many from the legal profession, academia and former OU students, took to Twitter to pay tribute to Gary: 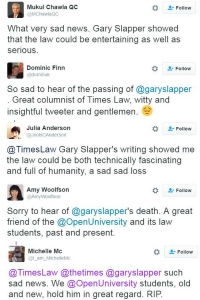