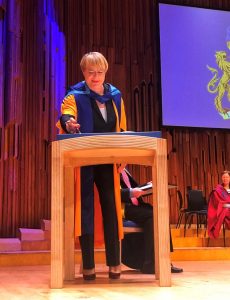 Known for his comic genius, acting prowess, love of languages and epic charity endeavours, Eddie Izzard is now the proud recipient of an Honorary Doctorate from The Open University.

Eddie collected his award at the OU’s Barbican Ceremony, and was nominated for his contributions towards the arts, languages, charity work and for promoting tolerance and understanding.

“You people have done the hard work”

Also collecting their awards at the ceremony were hundreds of OU graduates, and Eddie paid tribute to them, saying “I could hear people say six years…eight years…ten, twelve years that it’s taken; but to stay in there and keep the fight going and then see it through is a fantastic thing – so well done you.  You people have done the hard work.”

Known for his epic feats of running 43 marathons in 51 days and later 27 marathons in 27 days to raise money for Sport Relief, Eddie shared his thoughts on how students also have to endure to achieve their goals:

“You’ve got to decide that you’re going to do it come what may. You have to concentrate on that end point otherwise you could waiver, you could think well I’m not sure, I have to do this and I have to do that. You have to just fixate on that end point, the idea of getting it and what it can do for you. Getting a degree is going to be so much better than not having a degree.”