OU News
You are at:Home»Around the OU»UK scientists join NASA’s first steps back to the Moon – and onward to Mars

A team of scientists from The Open University (OU) and RAL Space are collaborating with ESA and NASA to investigate the occurrence and behaviour of water on the Moon.

Led by the OU’s Dr. Simeon Barber, the UK team has developed a sophisticated analytical instrument known as the Exospheric Mass Spectrometer (EMS) under a contract managed by the European Space Agency. Integrated with hardware supplied by NASA’s Goddard Space Flight Center in Greenbelt, Maryland, it forms the PITMS instrument which will be delivered to NASA today.

The instrument will measure the water and other molecules in the very thin atmosphere of the Moon throughout a lunar day, probing the emerging concept of a lunar ‘water cycle’. The instrument will also prove some of the detection technology that will be used by the OU on subsequent missions.

The Principal Investigator for PITMS is Dr. Barbara Cohen at NASA Goddard. The EMS is developed as one of several ESA contributions to upcoming international lunar missions and builds on expertise and heritage developed for the Rosetta Philae (Ptolemy) and Luna-27 (PROSPECT) missions.  PITMS was developed within a very short time, using a fast-track development strategy that balanced high efficiency of instrument development with a careful risk management approach.

PITMS will be delivered to the Moon by Astrobotic, one of the companies under contract for NASA’s Commercial Lunar Payload Services (CLPS) initiative. Commercial companies will deliver dozens of new instruments and technology experiments to the Moon throughout NASA’s Artemis program.  – Artemis missions include both robotic and human exploration on and around the Moon that will prepare humanity for our next giant leap – sending astronauts to Mars.

The Artemis program is distinguished by its collaborations with commercial and international partners, including ESA, and aims to develop the first long-term presence on the Moon. Understanding resources such as water on the Moon and learning how to use these as supplies for drinking water or rocket propellant could reduce mission costs and enable human exploration farther into our solar system, including Mars.

The delivery of the PITMS instrument through this joint ESA-NASA undertaking, for its integration with the lunar lander, is an important milestone in providing the new generation of instruments that will enable Artemis to deliver its ambitious program of science and exploration. 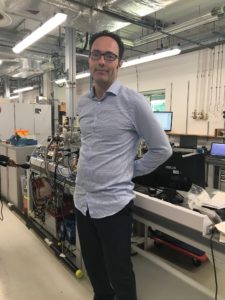 “Finding useful materials in space, and using them as supplies for onward journeys, is a simple concept with huge potential benefits. 50 years after humans walked on the Moon, we are limited to 6 astronauts orbiting 300 km above Earth in the International Space Station. All their supplies have to be launched by rocket through Earth’s gravity field. If we can build new bases in lunar orbit or on the Moon’s surface, supplied by materials we find and harvest locally, we can escape from the clutches of Earth’s gravity and explore deeper into our solar system.

“PITMS will study how water and other molecules behave during the warm lunar daytime near a lunar lander. We will obtain ground truth measurements to fill in the detail of the broader view we already have from remote measurements by orbiters. And then we will complete the picture using similar instruments on future landers near the cold lunar poles, where these molecules may have accumulated over billions of years to form a treasure trove of scientifically and practically valuable resources.”

“We have landed a similar instrument on a comet as part of ESA’s Rosetta mission but nothing has been as challenging as developing an instrument against the backdrop of the pandemic. To have designed, built and tested a proto-flight lunar instrument in just 18 months has been a huge achievement for RAL Space and the OU. Now we look forward to discovering more about the lunar water cycle and playing our part in furthering human exploration of the solar system.”

“Through the Artemis Accords, the UK plays an essential role in international space missions, building on our existing strengths in communications, robotics and satellites to further our understanding of the universe. If we want to travel extensively in space we will need to make or find the things, like water, which we require to support life. So this collaboration between the Open University and NASA is crucial in helping us pave the way for the next stages of humankind’s journey into sustainable space exploration.”

“The flight of ESA’s Exospheric Mass Spectrometer (EMS) as part of PITMS on the first NASA CLPS mission is an exciting opportunity to test our latest environmental monitoring technology for planetary environments. Instruments like EMS will be a key tool to monitor the impact of human activities on the lunar environment. Lunar landers and rovers modify the lunar exosphere at least locally, and monitoring these changes allows us to improve our science and learn how to protect the environment on planetary bodies.” 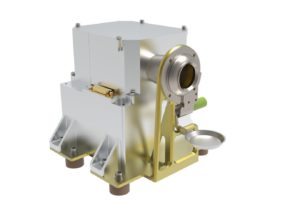 The Apollo Moon landings originally found the Moon to be a dry place. But decades later, advanced analysis of the returned samples – including in OU’s laboratories – showed that there was indeed small amounts of water within lunar samples. Orbiting missions such as NASA’s Lunar Reconnaissance Orbiter have also identified water ice deposits at and below the Moon’s surface. Based on observations and modelling, the Moon likely has a complex water cycle, where water may migrate from equatorial regions, driven by extreme day-night temperature cycles, until it becomes tightly ‘trapped’ at permanently cold polar locations. PITMS measurements will help scientists understand the source and movement of this water, which is a key open question in lunar science. Such knowledge would also pave the way for developing plans to harvest lunar water as a resource to support future human exploration missions and the establishment of lunar bases.