OU News
You are at:Home»Around the OU»TV and radio»OU/BBC documentary explores the volatile border between India and Pakistan

Marking the 70th anniversary of the Partition of India, the OU is exploring the recent history of the two nations and the Indo-Pakistan Border in a new three-part series on BBC Two.

Dangerous Borders: A Journey across India and Pakistan, which starts on Monday 14 August 2017, 21:00, travels from Gujarat and Sindh to the fiercely-contested Kashmir and Northern Territories with journalists, Adnan Sarwar and Babita Sharma.

British with family from India and Pakistan, the series is an emotional journey of self-discovery for both presenters. The effects of Partition are still real, but where do these two mighty nations stand in the 21st century. 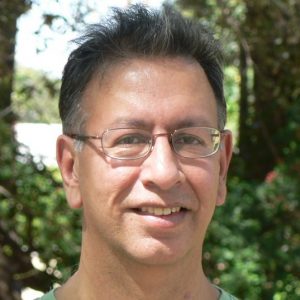 One of the academic consultants on the programme, Dr Sandip Hazareesingh

Capturing the legacy of Partition

Research Fellow in History at The Open University Faculty of Arts and Social Sciences, Dr Sandip Hazareesingh, is one of the academic consultants on the programme; he says it will change our ideas about India and Pakistan:

“When you hear about India and Pakistan in the media, it is generally about adversity and conflict; the series offers a fresh insight for the audience with the overarching message that, in spite of being divided by dangerous borders, the people of both countries share the same aspirations, dreams, hopes, and struggles.

For me, the most interesting aspect of the series is that it captures the very significant legacies of Partition and how these continue to affect the lives of the diverse communities living either side of the border. It invites us to question our assumptions, and motivates us to learn more about the entwined histories and contemporary lives of those living in both countries.

We have lots of exclusive content available on our free online learning platform, OpenLearn, including: an interactive timeline on the history of the Partition of British India; a collection of articles explaining borders, their creation, and the role they play in conflict and peace. Learning is supported by the Faculty of Arts and Social Science, with particular relevance to Q11 International Studies and Q83 Social Psychology.

Dangerous Borders: A Journey across India and Pakistan is produced by October Films in partnership with the OU; the Executive Producers are Jane Merkin and Denman Rooke and it was commissioned for BBC Two by Patrick Holland (Controller of BBC Two) and Tom McDonald (Head of Commissioning, Specialist Factual).

Commissioned for the OU by Dr Caroline Ogilvie