A brand new short film is now available to view on the award-winning BBC Ideas website called Are We Thinking About Alien Life All Wrong?

This new theory, which has yet to be proved, has scientists intrigued and Professor Cox explains in the video, with the aid of easy-to-follow animation, how life exists throughout the Universe and that it could be transported through space from one location to another. 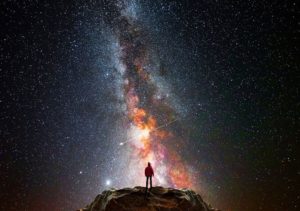 How big is our Universe?

The OU academic consultant on that film was Professor Andrew Norton, he said:

“It was hugely enjoyable to work with Pierangelo Pirak at Pomona Pictures to produce the short film called ‘How big is our Universe’. Our idea was to revisit the classic ‘Powers of Ten’ video made by the Eames Office in the 1970s, and bring it up-to-date for the 21st century by including new information and new views of the Universe that were not possible 50 years ago. The film nicely complements several of the episodes of ‘Universe’ with Brian Cox – in particular those focussing on the Sun and stars, and on the Milky Way.

“Hopefully this short film will encourage viewers to watch the TV programmes, if they’ve not already done so, and to explore the range of courses and qualifications offered by the OU in the area of Astronomy. Our introductory module SM123 Physics and Space is a great way for anyone to learn more about galaxies, stars and planets and embark on their own journey to begin to understand the Universe.”

BBC Ideas is a collection of short, digital films that aim to inspire new thinking and fresh perspectives across a broad range of topics and contemporary issues. With a growing playlist of titles, the films experiment with playful storytelling styles and techniques – animation, mixed media and an array of different film and video formats.

The Open University and the BBC are collaborating on a distinct OU playlist of films as part of BBC Ideas, drawing the university’s academic expertise to challenge and explore the ideas and concepts that shape our world.

Our BBC Ideas content is commissioned by Broadcast and Partnerships with support from all of our faculties, specifically the Faculty of Science, Technology, Engineering and Maths for ‘Are we thinking about alien life all wrong?’ with particular relevance to BSc (Honours) Natural Sciences (Astronomy and Planetary Science), BSc(Honours) Physics, Physics and Space and Science: galaxies, stars and planets and Astronomy

Visit our NEW Broadcast & Partnerships site where you can find extensive resources and information on topics related to these videos.