OU News
You are at:Home»Around the OU»TV and radio»New series uncovers biggest engineering challenge for a generation

London’s Victorian sewer network is at bursting point and its tunnels are regularly pushed past their limit.  A huge engineering project is underway to massively expand the capital’s capacity to deal with its own waste and a new three-part series co-produced by The Open University and the BBC follows the action.  The Five Billion Pound Super Sewer started on Tuesday 17 July on BBC2 at 9pm.

The super sewer is the biggest upgrade to the sewage system for more than 150 years, but built 90 metres under London, it’s also the biggest engineering challenge for a generation. Cameras have followed workers across the capital for the past three years, as they race to build the enormous tunnel on time and on budget.

The first episode follows the creation of the first stretch of the super sewer in East London.  Lead engineer Emmanuel Costes has to build a massive 80 metre deep shaft that connects to the super sewer – and make it watertight using a specialist technique called ‘slipform’.  It’s a risky approach, as it involves pouring concrete constantly for 15 days – and delays could spell financial disaster.

We follow Steve Perry and his team at the treatment works in Beckton, as they attempt to install the biggest pumps ever used in Britain to deal with sewage. We see how with this growing population, the existing sewers need constant maintenance in order to work at full capacity, and a group of sewer technicians (aka flushers) are sent in to survey the old sewers, and plan for new connections. 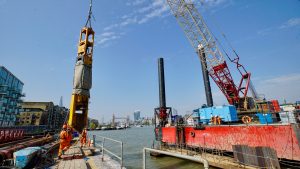 Engineers build a cofferdam structure out into the Thames

In the second episode on Tuesday 24 July, construction begins in the heart of London. Two key connection shafts along the Thames are to be dug to enable the super sewer to be built. In Battersea, a challenging construction technique called ‘diaphragm-walling’ is being employed to build a massive 90-metre deep shaft. At Tower Bridge, engineers need to build a cofferdam structure out into the Thames to make enough space for the second shaft.

An epic feat of Victorian engineering

Dr Bob Everett, Lecturer in Renewable Technology, was one of the Open University experts working on the series.  He’s written about how London’s Victorian sewers came into existence, and explains how engineers back then faced challenges just as complicated as today’s: 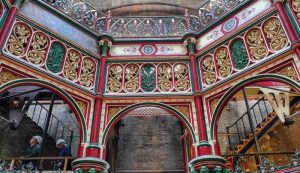 “The new Lee Tunnel gives extra carrying capacity to Bazalgette’s Northern Outfall Sewer which is simply enormous. You can walk from Bow to Beckton in East London along the ‘Greenway footpath’ on top of this vast structure. The pumping stations such as those at Abbey Mills and Crossness were prestige projects equipped with enormous steam pumps, some of which were named after members of the Royal Family.

“Balgazette’s men replaced 165miles of old sewers and constructed 1100 miles of new ones, using 318 million bricks, carrying out digging by hand and pioneering the Victorian use of Portland cement.  It was an epic feat which transformed how London dealt with its sewage, and freed the city from the fear of cholera.”

OpenLearn features articles exploring the history of the London sewers, and takes a deeper look into the environmental issues associated with complex urban infrastructures.  To explore all this and find out more about the series, go to our website.