OU News
You are at:Home»Around the OU»TV and radio»Hospital is back on our screens for another powerful series

Hospital, the fly-on-the-wall series that documents the incredible work and hardship faced by seven hospitals in Liverpool, is back for its fifth series. Co-produced by the BBC and The Open University’s Broadcast and Partnerships team, over eight weeks the series follows the extraordinary work of some of the region’s 20,000 NHS hospital staff, as they push the boundaries of what is possible with world class, cutting edge treatments and life-saving operations.

Filmed this winter, as A&E waiting times hit their highest ever recorded levels, Hospital is the story of the health service in unprecedented times. With a catchment area covering more than two and half million people, stretching beyond Liverpool to North Wales, Cheshire and the Isle of Man, audiences witness the difficult decision-making that consultants, surgeons and managers face on a daily basis.

Struggling to cope with the increasing pressure

The first episode explores the disruption caused as Liverpool’s two biggest hospitals become a single billion-pound organisation. The Royal Liverpool and Aintree, which are both in financial trouble are being merged to remove duplication of services and improve patient care. After three years of planning, services are being moved across to the new Royal, despite the building not being fully complete. 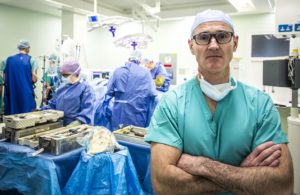 With both hospitals at full capacity, the staff struggle to cope with the increasing pressure, as they are forced to deal with the turmoil from transitioning to new facilities. Exploring mental health, knife crime and the ageing population, Hospital brings audiences closer to the issues and challenges that continually dominate the headlines.

OU Academic Consultants,  Professor Cathy Lloyd, Professor of Health Studies and Julie Messenger, Professional Lead for Nursing have been involved in shaping the script and production.

“Hospital gives viewers a raw view of the NHS, showing the reality of the challenges that its staff face. Looking closely at important themes that are affecting our society, it’s an impactful and powerful series that I am thrilled to be involved with again.”

OpenLearn, the free online learning site from the OU has extensive resources to further understanding about the series, including short courses on ‘Caring in hospitals’ and ‘Social care in the community’, as well as an interactive to test your knowledge about the NHS.

The first episode of Hospital airs on Thursday 13 February at 9pm on BBC Two. It will also be available to watch on BBC iPlayer.