OU News
You are at:Home»Around the OU»TV and radio»Civilisations: New landmark BBC series an antidote to modern life

We live in an age where popular social media videos are often less than 30 seconds long, and people’s attention spans are shorter due to our busy, multi-tasking lives.

But now, people are encouraged to pause and enjoy a new visual spectacular from The Open University and the BBC.

Civilisations, the new landmark series starting on Thursday 1 March (BBC TWO, 9pm) offers an antidote to the frenzied pace of modern life, promising wonderful footage and detailed analysis of works of art to give viewers the chance to fully absorb and appreciate what they are seeing.

“Its broad-ranging brushstrokes paint a picture that captures the values of humanity and globalism that typify the OU and the BBC.  It is a timely and significant collaboration between these historic partners.”

It’s already dubbed as one of the most exciting and talked-about TV art series in many years and is presented by Mary Beard, David Olusoga and Simon Schama.

Professor Gill Perry is one of the OU team that has been working on the co-production, and said:

“Many viewers will remember Kenneth Clark’s 13 part Civilisation, broadcast for the first time in 1969, which played such an important role in making the history of European art vivid and accessible to a large audience across the world. In contrast, this series invites the viewer to look beyond Europe. 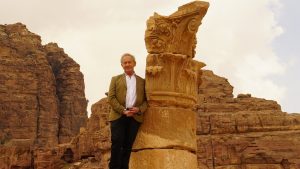 “The presenters travel around the globe and look up close at dazzling works of art and architecture, from the Taj Mahal, Angkor Wat, the Benin Bronzes, photographs of the American West to Dutch paintings in the Rijksmuseum, explaining what images can tell us about the ‘big questions’ of human civilisations.

“The presenters explore the important role of art and the creative imagination in our understanding of the slippery word ‘civilisation’. Each episode is focused on a universal theme that engages us all such as the human body, landscape, religion, colour, and contact between cultures.

The visual footage is sensational, with a particularly memorable scene as Mary Beard travels to Seville in Spain to follow the procession of the Virgin of Macarena in Holy Week.

Dr Kathleen Christian, another member of the OU team, continued:

“Some wonderful footage captures the drama and emotion of the event; watching the tears on faces in the crowd you understand the fundamental social and spiritual importance images have always had in human life.”

There is a real sense of the potential impact of visual culture, and an ambitious reach in this series.

Civilisations begins with the first episode, The Second Moment of Creation on Thursday March 1 looking at the formative role art and the creative imagination have played in the forging of humanity itself.

To accompany the Civilisations series, The Open University has also produced a stunning poster representing many of the objects from around the world that are featured in the programmes. To order your free poster go to http://www.open.edu/openlearn/civilisations#order-your-free-poster

The Open University has been working with the BBC to produce a vivid new series that relates directly to our new and developing Art History Curriculum, its digital platforms and outreach projects.

The exciting new third level art history course launched this year – Art and its Global Histories – explores in depth many of the issues explored in this TV series. It covers art from the early modern period to the present from a global perspective, looking at many of those cultural encounters featured in the BBC series.

Other online assets include films made by OU academics that provide detailed analysis of many of the objects featured in this BBC series, such as the Openlearn resource Travelling Objects  and our Open Arts Objects archive.

Join in the discussion

Civilisations begins with the first episode, The Second Moment of Creation on Thursday March 1 at 9pm on BBC2, looking at the formative role art and the creative imagination have played in the forging of humanity itself.  Join the debate afterwards at our online discussion hub, where Open University academics will be posting questions and responding to your questions and thoughts.

Civilisations is produced by the BBC and Nutopia in partnership with The Open University and in association with PBS. The Executive Producers are Jonty Claypole and Mark Bell for the BBC, and Denys Blakeway and Michael Jackson for Nutopia. The Series Producers are Melanie Fall and Ian MacMillan. Bill Gardner, VP of Programming and Development, will oversee the project for the PBS version of the project.