OU News
You are at:Home»Arts and social sciences»Society and politics»Being Black and British: OU/BBC series explores what it’s like for six housemates

A two-part series co-produced by the BBC and the OU brings six black Britons from very different backgrounds and viewpoints together to share their personal stories and debate being black and British.

We Are Black and British, airs on consecutive evenings beginning on Wednesday 23rd and Thursday 24th February on BBC Two at 9pm.

Six people, each bringing their own deeply personal experience of a seismic moment in their life, come together to live for a short period under one roof, at a time when debates about race and racism in the UK have sparked a nationwide discussion about history, culture, and change.

The six very different people grapple with tough, unsettling, and emotional questions and explore ways forward, as well as challenging one another on their viewpoints. The back-to-back episodes see them confront their differences, hoping to find answers from each other and from those who are trying to change Britain. 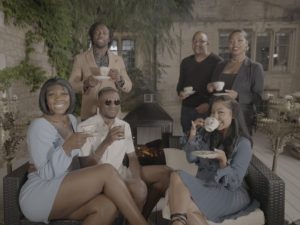 The group spent time together, hearing about one another’s experiences.

The group share experiences of school, encounters with police, and coming out as gay.

The series drew on  expert guidance from OU academics; providing their research and expertise as well as a professional eye on the content.

“We need good debate, in the media and on social media. And people do disagree a lot, amongst Black people too there are challenging thoughts as to what “blackness” is. There may be some surprises and even shocks about some of say Kehinde’s (one of the participants) ideas, but these are important to think about and debate, even if people do not totally buy into his ideas.”

“It is an unusual premise for a series; a reality show which is almost like a Black Big Brother House. It could divide viewers, but it will hopefully begin conversations too and perhaps allow people to better understand the complexities, nuances and challenges of being Black and British today.”

“The series deals with difficult topics in an interesting and very social way.  It should allow for some further thought which could help move us forward in this debate.”

Find out more from our academic consultants as they explore the black British experience a little deeper, bringing out areas from their own research areas. These include Dr Ilori considering the experiences and economic opportunities within the UK black community, covering intergenerational wealth among, the startling lack of black CEOs in the UK and growth in business ownership.

Dr Naomi Watson looks at the representation of black people in the NHS and their often problematic relationship with it (the current situation in an NHS which is considered to be inequitable) as well as drawing on research about black women’s health and initiatives to empower them. Dr Anthony Gunter looks at what it’s like to be black and British in the policing and criminal justice system. The disproportionate punitive treatment of Black African-Caribbean children and young people in the UK education and criminal justice systems, are contentious issues dating back to the 1970s, he says.

This project was commissioned by Broadcast and Partnerships and is supported by the Faculty of Arts and Social Sciences with particular relevance to: BA (Hons) Social Sciences, BA (Hons) Politics, Philosophy and Economics, Investigating the Social World, Introducing Criminology, Understanding politics: ideas and institutions in the modern world, International relations: continuity and change in global politics and Modern Political Ideas.

Visit our NEW Broadcast & Partnerships site where you can find extensive resources and information on topics related to this series.