OU News
You are at:Home»Around the OU»TV and radio»New TV series unlocks the Languages Of Ulster 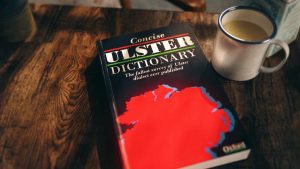 The Concise Ulster Dictionary will guide us as we learn about those who have preserved the languages, uncover the sources that have influenced how we speak today and celebrate those who turn our words into art.  This series is a celebration of the rich and diverse heritage of languages in Ulster, telling the story of the Dictionary’s creation and profiling some of the writers whose work captures the vitality and richness of the local speech traditions.  It helps to explain the background and origin of familiar words such as brae, clabber, banshee, kaleyard and dailygan – many of which present challenges for computer spell-checkers! It’s a lyrical and affectionate exploratio  of language, people and place and an encouragement to find out more about the language. It also demonstrates just how much Ulster-Scots and Irish words remain part of everyday speech.

John D’Arcy, National Director of The Open University said: “Languages of Ulster is the first programme that has been a direct collaboration between BBC Two Northern Ireland and The Open University. It allows us to connect with viewers on a local level and encourages them to access our additional learning materials related to the programme on OpenLearn – The Open University’s free learning platform. It has been a fantastic experience developing this content, and we hope the public will enjoy the end result.”

The Open University hosts four additional short videos on OpenLearn, exploring the rich and diverse vocabulary associated with the languages of Ulster. These are available for free on www.open.edu/openlearn/languagesofulster

Languages of Ulster is a Below The Radar production for BBC Northern Ireland made with assistance from Northern Ireland Screen’s Ulster-Scots Broadcast Fund. The series will broadcast on 12th November, followed by the 19th and 21st November at 10 pm on BBC Two Northern Ireland. It will also be available on iPlayer to all those living in the UK, following the broadcast of each episode and on Sky and Freeview for viewers in the Republic of Ireland.