OU News
You are at:Home»Around the OU»BBC honours OU in 50th Anniversary celebrations

In an inspiring address marking the OU’s 50th anniversary celebrations Tony Hall, director general of the BBC, and Martha Lane-Fox, Chancellor of The Open University hosted a special reception to celebrate the unique OU/BBC partnership, its achievements and the shared social mission of both National institutions.

The Open University has always had an iconic place in the hearts and minds of those who believed in its social mission. Tony Hall was one such person. He opened his speech with a recollection of the first time he heard about The Open University while he was at sixth-form college and thinking about what a brilliant idea it was – education for anyone, whatever their background, whatever their circumstance. He also fondly remembered seeing the OU logo on television screens.

He put the success of the partnership down to three things; a shared social mission; the joint desire to capture the imagination and minds of millions and how to adapt and change the way we reach people. 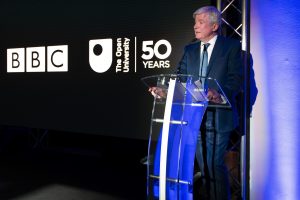 “We share the same ambitions. We are universal – we’re here for everyone. The Open University – and the BBC – are two institutions that this country should be very proud of.  I say that without a hint of complacency, but they are both phenomenally important to the fabric of the UK. Together, we believe that each one of us should have the same opportunities to learn. Together, we believe that we should all be able to wander through knowledge.”

Tony Hall also highlighted how instrumental Sir David Attenborough was when, in 1965 as the controller of BBC 2, he was given responsibility of making Jennie Lee’s concept of The Open University into a practical reality – the OU is now a key part of her legacy.

Today the OU/BBC partnership enables the exploration of subjects that changes lives, that sparks imagination in millions of people and creates engaging content to further lifelong learning. All of which would not be possible without the support from The Open University and the involvement of its academics. “We’re so proud of what this partnership achieves – and how it works.”

Capturing the imagination of millions

Martha Lane-Fox expressed her pride at being the Chancellor of The Open University saying that it is “the best job in the world.” She also offered thanks to all those who have been involved in the partnership. 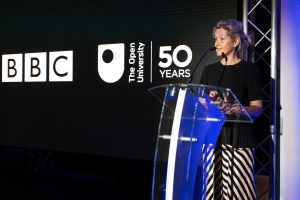 “We were the first university in the world to have the imagination and foresight to embrace the new technologies of television and radio. Our partnership with the BBC continues today enabling us to educate and inspire the widest possible audiences with landmark programming such as Blue Planet II, Horizon and Coast.”

“There are many people here tonight who have been or are part of producing some of the wonderful content we’ve glimpsed from the show reels. I’d like to thank them all… and a thank you Tony and BBC for helping us to make education open for all. We look forward too many more years of working together and changing lives.” She also gave special thanks to Sir David Attenborough for all his support establishing the partnership almost 50 years ago.

Dr. Caroline Ogilvie, Head of Broadcast at The Open University, said “The Open University’s partnership with the BBC is all about inspiring learning. From the first lecture broadcast in 1971 to the current peak-time commissions, our aim has always been to give people the opportunity to find out more and to take their interests further. The partnership with the BBC has evolved over the last 48 years and it has an exciting future as we continue to work across BBC channels and platforms co-producing a wide range of content.”

The OU’s unique educational partnership with the BBC provides content across TV, radio and digital channels and platforms.  Each year the OU co-produces approximately 35 prime-time TV and radio series including, for TV, Blue Planet II, Civilisations, Dangerous Border: A Journey Across India and Pakistan, Drugsland, The Secrets of Silicon Valley, Rome Unpacked and Flatpack Empire.  And for Radio, commissions include More or Less, The Global Philosopher and The Bottom Line. 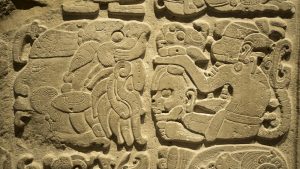