OU News
You are at:Home»Around the OU»TV and radio»Antidote to crime dramas hits TV this week – The Met: Policing London

Across London, twenty four hours a day, the Metropolitan (Met) Police is dealing with the demands and dilemmas of policing a city of eight and a half million people. Following on from the highly successful first series, a second series of The Met: Policing London, which begins on BBC One, 9pm on 24 May, lifts the lid on Britain’s biggest and most complex police force.

Produced in partnership with The Open University, the series was filmed over the course of a year and shows police officers dealing with life, death, crime and its victims all across the capital. Alongside Dr Louise Westmarland and Mike Lucas, Dr James Mehigan was one of the OU’s academic consultants overseeing the programme, and says it gives a good insight into the work of the police:

“It’s certainly an antidote to the fictional police dramas that are on our screens. The reality is that much of police work is quite routine, and the series shows us these elements as well as the more exciting, but thankfully relatively unusual, things such as firearms and car chases.

It is very easy to criticize the police, but they have a very difficult job. Police officers are expected to deal with urgent conflicts and immediately resolve them in as fair a fashion as possible. The series opens up policing and helps us understand more about their role. 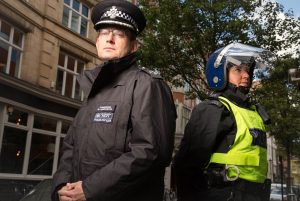 London is a complicated city – it’s huge, very diverse, has a disparity in wealth and cultural backgrounds, and it operates 24/7 as a global city.  Dr Mehigan notes how effective the programme is at showing how the Met balances the different demands on its service:

“I was impressed at how the series showed different viewpoints, from the partnership of police officers working together, to disgruntled communities angry at the way they were being policed. We also see how the police manage a large protest, which escalates – they have to balance different human rights outcomes, the freedom of speech, and the right to peaceful assembly, alongside public order considerations; it is a very tricky balancing act.”

Explore our free resources on Openlearn, including an interactive “Finding the Truth” game, testing what you really know about crime. You can also order a FREE poster.

Courses from The Open University relevant to the series:

The Open University’s Centre for Policing Research and Learning has been established to improve policing through research and education on varied as cybercrime, ethics and leadership, and gaming tools, as well as offering bite-sized informal learning through to part-time PhD study.