After an absence of two years due to Covid restrictions, honorary graduates recently picked up their awards in person, at ceremonies in both London and Brighton.

British-Iraqi businessman David Dangoor, who is a major educational and scientific philanthropist, attended the ceremony at The Barbican on one of two days’ celebrations to become a Doctor of the University. 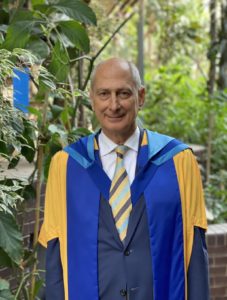 He joined hundreds of graduates receiving their degrees at the same time. Honorary graduates are an important part of The Open University family and since 1973, the OU has awarded more than 1,100 honorary degrees to recognise the achievements of society’s most outstanding individuals.

David is managing director at Monopro, a property development franchise, originally set up by his father Sir Naim Dangoor, who was forced to abandon his business interests in Iraq, his home country where the family lived, and start again in the UK.

David believes the UK supported him and his family when they were in need. In turn, he is now a trustee of The Exilarch’s Foundation, the family’s philanthropic organisation that supports hundreds of philanthropic educational, scientific and health projects annually.

He also supported many projects at The Open University from STEM’s Massive Open Online Courses (MOOCs) on FutureLearn, through to the OU’s flagship further education initiative the Flexible Learning Fund.

The Foundation has also provided over 4,000 scholarships to Russell and 1994 Group university students over a six-year period.

On receiving his honorary doctorate at The Barbican recently, David said:

“Education was an important factor that allowed my family and me to rebuild our lives when we came from Iraq some years ago and we never forgot the lesson that education is the tool that you can bring with you wherever you are forced to move.”

He acknowledged graduating students had worked very hard and had achieved “something incredible” to collect their degrees, sometimes while working full time, and his message to them was:

During 2022, approximately 10,000 graduates will be presented for their qualifications, crossing the stage at degree ceremonies which are held throughout England, as well as in Wales, Scotland, Northern Ireland, and the Republic of Ireland.

Former Pro-Chancellor of the OU Richard Gillingwater, received a Fellowship of the University. He was Chairman of the Council from January 2015, with his term of office ending in December 2018, and helped steer the university through difficult times.

He played a key role in promoting the University’s external reputation and in influencing major external stakeholders both nationally and internationally and regularly officiated as Chief Presiding Officer at degree ceremonies.

Businesswoman Philippa Foster Back was also rewarded for her exceptional contribution to ethical business practices and received a Doctorate of the University at the Brighton ceremony.

She was director of the Institute of Business Ethics and was responsible for implementing strategy and leading a team to ensure the organisation meets its charitable aims of raising awareness and spreading best practice in the field of business ethics.