OU News
You are at:Home»Around the OU»Singer Tim Wheeler joins 277 students for degree ceremony in Belfast

Singer, songwriter and Alzheimer’s campaigner Tim Wheeler was honoured by The Open University (OU) with the award of Doctor of the University at a ceremony in Belfast’s Waterfront Hall on Friday 21 October. Mr Wheeler had his award conferred alongside 277 graduating students – from all walks of life, of all ages and backgrounds and from a spectrum of careers – as well as fellow honorary graduate Ms Catherine Bell CBE.

Mr Wheeler was recognised for his exceptional contribution to education and culture, while Ms Bell, formerly Deputy Secretary for Policy in the Department for Employment and Learning, was awarded a Master of the University as a consequence of her outstanding public service. The Open University makes honorary awards in line with its mission to be open to people, places, methods and ideas, and the promotion of social justice through the development of knowledge and skills. 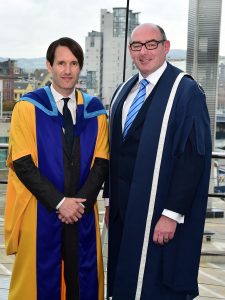 Many of the 277 graduates have fitted their study around work or family commitments; some have a disability or live in a remote or rural community, while others did not have traditional university entry qualifications, or came from low-income households. For all of them, today’s ceremony marks the culmination of years of hard work and commitment to learning.

One student is Diane Gibb from Coleraine, who achieved a BA (Hons) in Business Studies. She decided to study with The Open University because the flexibility of studying part-time fitted her life as a working mum. She believes that studying with The Open University has helped grow her confidence and build a good relationship with her employer, as she can now apply new skills and abilities directly to her job.

“I had to be organised and self-disciplined in order to meet deadlines and get my OU work done during the only free time I had whilst raising a family. It meant I was able to work and study at the same time and benefit from continuous work experience alongside my degree.”

John D’Arcy, National Director of The Open University said: “Our students are a constant source of inspiration. They work incredibly hard to fit learning into their lives and proving that part-time higher education makes a meaningful difference to individuals, families and communities.

“We were also delighted to welcome our two exceptional honorary graduates to The Open University family”.

Tim Wheeler, Doctor of the University, said: “I’m incredibly grateful and proud to be receiving an honorary doctorate from The Open University in Belfast. I’ve very fond memories of the Waterfront Hall when Ash played the Good Friday Referendum Concert with U2. Returning to the stage to receive this honour will be another very special moment in my life.”

Catherine Bell, Master of the University, said: “I am really delighted and humbled to receive an honorary Master’s degree from The Open University for my work in promoting lifelong learning. 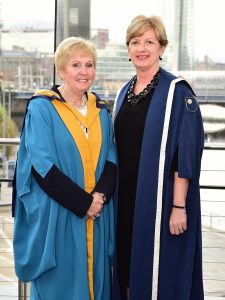 Catherine Bell, Master of the University and Heather Laird, Assistant Director of The Open University in Ireland

“The Open University is an organisation for which I have huge admiration, an organisation which over the past 47 years has provided high quality degree and post graduate level learning to those many tens of thousands of people who did not have the opportunity to attend traditional universities.

“To be recognised by this organisation is a tremendous honour.”