OU News
You are at:Home»Around the OU»OU pays tribute to the life of Mary Wilson

Following the sad death of Baroness Wilson of Rievaulx, who passed in June, The Open University (OU) pays tribute to her life and acknowledges her role in society with her late husband, the former Labour Prime Minister, Harold Wilson. 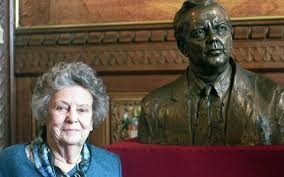 Baroness Wilson with a bust of her late husband Harold

Baroness Wilson of Rievaulx was aged 102 when she passed away and was the oldest living spouse of a prime minister. Her husband and founder of the OU, Harold Wilson, died in 1995. Harold and Mary had two sons: Robin, a teacher by profession and an Emeritus Professor of Mathematics at The Open University and Giles, a teacher.

Lady Wilson was born in Diss, Norfolk, in 1916, the daughter of a Congregationalist minister. Despite her intelligence and love of learning, Mary missed out on the opportunity to go to university and was working as a shorthand typist when she met Harold Wilson. They married in 1940 and she looked forward to a future as the wife of an Oxford don; she said: “Oxford was my idea of heaven.”

Mary’s loyalty and support to her husband, Harold has been well-documented. It is no secret that Mary did not enjoy the trials and tribulations of political life or the media intrusion which it involved. Instead she and her family enjoyed precious time away from London at the Scillies, where she continued a lifelong association.

An accomplished poet, once mentioned as a possible laureate, she produced two published volumes of poetry in the 1970s and an edited anthology in 1983. Mary had loved literature and poetry since all her life, cherishing her long friendship with the poet, Sir John Betjeman, who she and her husband had hosted at Number 10: Downing Street. Mary wrote the following poem for her husband’s eulogy:

“She will forever inspire”

Director of Communications at The Open University, Lucian Hudson, said:

“The Wilson family contributed significantly in many ways to what The Open University is about and should always stay true to. Mary Wilson and her generation had values and a vision of a better society that will forever inspire.”