OU News
You are at:Home»Around the OU»FutureLearn marks fifth anniversary with news of postgraduate degrees with OU

The announcement was made during a celebratory reception at the Houses of Parliament on Wednesday March 14.

The event was sponsored by Baroness Martha Lane-Fox of Soho, CBE and was attended by a selection of FutureLearn’s university partners, members of both the House of Parliament and the House of Lords, as well as OU representatives.

Peter Horrocks, Vice-Chancellor of The Open University, CBE and member of FutureLearn’s Board, announced:

Building on its contribution in providing high-quality MOOCs for FutureLearn learners, The Open University plans to deliver postgraduate qualifications through FutureLearn later this year and in 2019. We are actively exploring what this could entail, but our initial offer would be to provide up to five qualifications.

Peter continued, following up on his speech at Durham University last year, saying: “I believe that we already hold the key to unlocking the fortress mentality; right here in our hands.

FutureLearn is that key; the one that will enable us to break down the fortress walls, to bring providers together and deliver British education to the world. 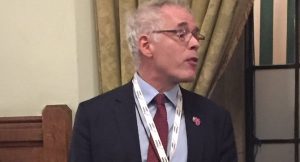 Peter Horrocks pressed the need for the “power of collaboration” among providers by “enabling Universities to share costs of course development, to work together on professional development; to help the worlds of FE and HE glue together as a single tertiary sector; benefiting students and society in a cost effective way.”

Peter concluded his remarks by saying:“FutureLearn has been a fantastic innovation for the OU, but it’s so much more than that. Five years on it has the potential to be the very tool needed to make digital collaboration across HE/FE and Government a reality.”

Baroness Lane-Fox gave credit to the creation of FutureLearn in her welcome address saying:

I feel extremely proud of the UK for creating FutureLearn as distinct from some of the other orgs that are doing this kind of online learning, because it is so important that we continue to challenge ourselves about the best way to learn, that we continue to improve, change and innovate around the way we learn, and FutureLearn is the best example of that. 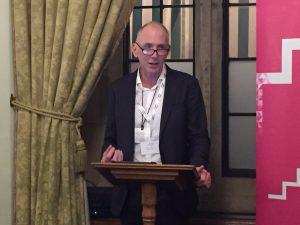 During the evening, Simon Nelson, Chief Executive of FutureLearn spoke about the achievements of the EdTech startup in the past five years. FutureLearn now has over 7.5 million learners in over 230 territories around the world and 155 partners including 95 of the top universities in the world today.

Speaking about FutureLearn’s progress, Simon said: “We are no longer just a mooc platform for our partners – but a trusted partner in their digital transformation.”

One of the most exciting developments is the entry we have made into the market for online degrees.

He added: “Over the last year we have signed up 3 university partners; Deakin and Murdoch in Australia – Coventry in the UK – who are delivering fully online masters degrees through FutureLearn. And I’m delighted to announce, this evening, that The Open University plans to begin offering postgraduate degrees on FutureLearn too, and we expect to announce more partners over the next few months.”

Looking towards the future, Simon said: “We are branching out beyond the University sector too, and have become the common platform underpinning a £40 million project from the Institute of Coding, alongside The Open University, and a £20 million government funded Cyber Discovery programme, aimed at teaching teenagers cyber security skills.

Working, with the British Council, we are used by the British government to promote UK education overseas through the Study UK campaign which has enabled tens of thousands of learners from around 127 ODA countries to learn with top UK universities and provide new pathways to study in the UK. And we are transforming access to higher education for Syrian refugees, giving them the skills to one day rebuild their country in partnership with Kiron and King’s College London.”

We believe that the true power to change education lies in creating a space for collaboration between forward-thinking institutions, employers and governments and we are excited that FutureLearn is creating that environment for our partners.

Talking about the work of The Open University and FutureLearn, Baroness Lane-Fox said: “Not only is it incredibly important as part of the wider education landscape but it’s also important for how we think about ourselves over the next journey in the UK’s history. And I really believe that because I think it’s very important that we find things that we’re good at, we double down on them, and we shout about them, and we celebrate them. And this feels to me like an enormous UK success story.”

Baroness Lane-Fox concluded with some direct remarks to FutureLearn:

You’re putting learners and education at the heart of how you think about things… and for that reason, you’ll be monumentally successful, I know.