OU News
You are at:Home»Business and law»Management»What can Star Wars teach us about leadership?

It may have taken place in a galaxy far, far away, but in terms of leadership, there is much in Star Wars that we can learn from. The epic battles between the Jedi and the Empire have become part of the fabric of popular culture.  But take a closer look behind the light sabres at the clashes between the Jedi and the Rebel Alliance on one side and the Storm Troopers under Emperor Palpatine on the other, and you will see traces of many of the ideas that shape leadership, and help to account for both its successes and its failures, explains Dr Leah Tomkins, Senior Lecturer in Organisation Studies, Open University Business School on Star Wars Day (May 4th)…

Dramas of all kinds – whether on the screen or in our organisations – tend to draw on archetypes from a small cast of characters. The most powerful of these are based on the essential family – father, mother, son and daughter.  Our connection with these archetypes lies deep and largely unconsciously within us, but when we meet a character in real life who triggers the fantasies associated with them, we are affected in ways we can sense but not always fully understand.  This is why we often have strong feelings of attraction or aversion to people without being able to completely rationalise them. In the context of leadership, this is why we often worship or loathe our leaders, judging them by much harsher moral standards than other people we meet.  A leader triggers our deepest fantasies and anxieties about the family we want to belong to, and what role we ourselves want to play in that family drama.

Form a unit, not a death knell 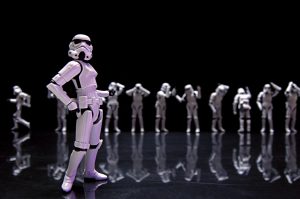 We may be drawn unconsciously to the Jedi because they seem to operate like the kind of extended family to which we would like to belong. We have the Grandfather figure in Yoda, the supportive Uncle figure in Qui-Gon Jinn and the Brother figure in Obi-Wan Kenobi.  Together they form a unit in which issues can be discussed, problems experienced and resolved, and failings taken as learning experiences, not a death knell.  The Jedi Council takes a consultative approach to decisions affecting their organisation, mirroring a functional family unit in which all members have a role and a voice.

Even though these particular Jedi characters are men, the fantasies surrounding the Jedi unit are more closely associated with feminine qualities of empathy, compassion and mutual support. I think the archetype they evoke most powerfully is that of caring leadership – an idea which is gaining increasing interest in both academia and leadership practice.  The notion that our leaders should care for us is associated with some of our most primal emotions; it comes from our yearning for protection, guidance and understanding from the organisational unit to which we belong, and in particular, it speaks to our craving for maternal love.  I want to emphasise that I am not saying that female leaders are more caring than male leaders, but rather, that the fantasy that our leaders should care for us gets it force from our unconscious reference to maternal love.

Caring leadership as a force for good? 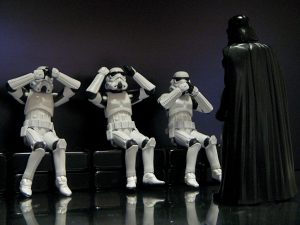 The notion of caring leadership is hugely powerful for our understanding of the dynamics of organisational life. Just like families, organisations are places where there are inevitably differences in experience, seniority and status. Even the flattest organisational structure will have some rungs or ranks. And even the most egalitarian culture will have some mechanism by which some members are considered more vital to the business than others, whether this is because of experience, expertise, or some other special contribution.

Fantasies of care invade organisations because they do not operate along egalitarian lines. Indeed, care is the justification for favouritism and discrimination.  A caring leader will promote the interests of his or her subordinates just as a mother will discriminate in favour of her child: It is part of the myth of the Ultimate Mother that she will go above and beyond the call of duty to look after her own.  Moreover, the Ultimate Mother is sensitive to how her child’s needs fluctuate. When the child needs protection, Mother steps in and takes over; when the child needs to test his or her independence, Mother stands back to empower.  In other words, the maternal associations of caring leadership create a world in which it is okay to be a junior member of the family unit.  Differences in status or capability or experience are seen as opportunities for learning rather than failure… just like the Jedi Council. 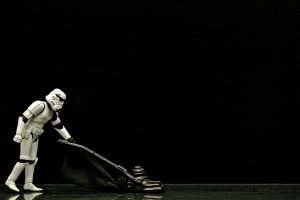 In contrast to the Jedi, the Empire is ruled by fear and oppression. There is very little compassion or consideration for others, and it comes across as a soulless, depersonalised place where many of the senior figures, henchmen and foot soldiers choose to conceal their faces.  The Empire’s leadership creates a culture of unquestioning, drone-like obedience.  The orders are given from a distance, and we see very little engagement between the Emperor Palpatine and those on the front line. Unlike the world of the Jedi, being a junior member of this organisational unit is not a safe place to be; inequalities and asymmetries of power are associated with fear, not with learning.

The Empire also triggers fantasies related to the family, but to a different family dynamic in which paternal extremes dominate. This is a family governed by the Ultimate Father, who is omnipotent, even omniscient.  When this fantasy is applied to organisations, a primeval masculine concern for legitimacy comes into play.  The legitimacy of the occupier of the leadership role has to go unchallenged for any sort of order to be maintained.  Of course, I am not saying that masculinity necessarily creates leaders as evil as the Emperor Palpatine, merely that when we encounter such strong, unchallenged and distant leaders – in fiction, film or fact – we respond to them in ways which echo our primitive feelings about paternal love.

Clash of leadership fantasies: battle between good and evil 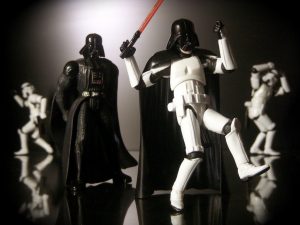 In a way, then, the epic battles between Jedi and Empire echo the tussles with femininity and masculinity that are encapsulated in family archetypes, and which are transferred into our relationships with leaders in the real world. I am making the provocative case for the Empire as masculine, i.e., powerful, in order to make a comparison with the Jedi as feminine, i.e., caring. What is interesting about this for leadership is not that it represents the battle between good and evil, which is surely far too simplistic for anything related to our real lives. Instead, I think the Star Wars epic illuminates some of the issues for leadership in our different and often inconsistent reactions to care versus power.

We are drawn to the idea that our leaders should care of us, because this makes us feel loved, protected and valued. But we are also likely to resist this kind of leadership, because care has such powerful associations with dependency, even weakness.  Think, for instance, about how much scorn there is in our accusation that something is ‘touchy feely’ or ‘pink and fluffy’ in our organisational lives.  So, alongside the appeal of the caring leader there is also a desire for leadership to be strong and powerful.  We don’t always need our leaders to be compassionate or supportive; sometimes we would just rather they were strong and effective.  A crucial aspect of this strength is that the leader should also be just a little bit distant and remote.  If we get too close to our leaders, we will see them ‘warts and all’, and we instinctively know that this will make it harder for us to follow them to the ends of the earth.  In other words, for leadership to work, a bit of distance and a bit of facelessness is vital.  Not as much distance as with the Emperor Palpatine, perhaps, but enough to trigger the positive associations of masculinity in our organisational and family units.

Can the dark side ever be defeated? 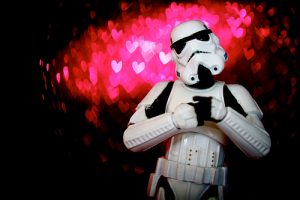 So, the Jedi are winning in that on-going battle in the galaxy far, far away. This feels good, because it evokes our deepest fantasies that care, compassion and belonging can guide our lives, both in and out of organisation.  But my tracing of parallel family archetypes in the Empire is designed to take us beyond simplistic notions of good versus evil – or indeed, feminine versus masculine.  As human beings we absorb all the archetypes of the family unit, evoking and replicating both care and strength, both dependence and independence.  We are shaped by, and respond to, a mix of things that are associated with both masculinity and femininity, and with the positive and negative sides of both.  In other words, we have aspects of both Jedi and Empire inside us, so in the galaxy of our real working lives, no defeat of the ‘dark side’ will ever be desirable, necessary or complete…