OU News
You are at:Home»Arts and social sciences»Society and politics»Stability and cooperation is an asset for Iran, as tough sanctions are lifted

Dr Edward Wastnidge, Lecturer in Politics and International Studies, outlines the importance of sanctions against Iran being lifted…

The lifting of punitive economic sanctions against Iran is an important moment, not only due to the economic benefits that the Islamic Republic should see as a result, but also in terms of the wider political shift that this signifies. 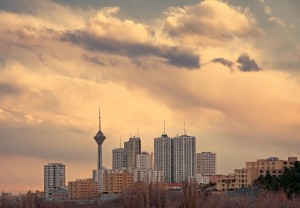 Skyline of Tehran at Sunset

Economic benefits with an optimistic atmosphere

Economically, Iran will quickly see the benefits in terms of its hydrocarbon exports – this should produce a much needed windfall, in spite of falling prices globally, as Iran will be able to increase its oil and gas exports to bring in much needed hard currency. Also, the lifting of sanctions will help in terms of wider energy-related projects.

For example, the construction of new oil and gas pipelines can go ahead across the territory of Western allies (such as Pakistan and Turkey) that have previously been subject to heavy Western pressure to not deal with Iran. Also, European companies can now invest freely without threat of US legal action against them. Some US sanctions are to remain however, such as those imposed due to alleged Iran’s human rights abuses and terrorism allegations which pre-date the nuclear issue.

The scaling back of EU sanctions will be more noticeable though, as these are more recent and came about directly as a result of the nuclear issue. Iran has just about coped without formal links to the US for over 30 years, but its economic relationship with Europe is far more developed and the sanctions imposed by the EU bit hard.

This will allow much greater European economic activity in Iran, and we have seen Germany and France already making moves to re-invigorate their substantial pre-existing economic ties with Tehran. EU sanctions on oil, banking, finance, transport, will all be lifted and assets will be unfrozen also. For the UK we’re starting to see a more constructive engagement too, with the re-opening of embassies in August evidence of the more optimistic atmosphere. 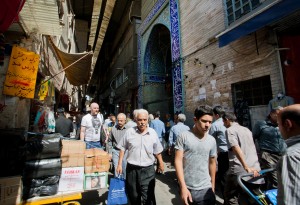 A crowd of people walk through the narrow streets of Tehran. Credit: Radiokukka

The dominant narrative from western governments has been that sanctions worked and ultimately brought Iran to the negotiating table. The flip side of course is the effect that this has had on ordinary Iranian people who have had to contend with rampant inflation, a plummeting currency, and economic and diplomatic isolation.

Stability and cooperation is an asset

The significance goes beyond economic concerns though. It demonstrates the power of constructive diplomacy at a time when the region finds itself in one of the most turbulent periods of its already tumultuous history – with conflict raging in Syria, Iraq, Yemen, Libya and major terror attacks in Lebanon, Egypt and Tunisia.

Through all this, and throughout the tough times of sanctions, Iran has remained comparatively stable, and this stability and commitment to diplomatic endeavour is finally being seen as a useful and constructive asset. In his last two speeches to the UN General Assembly, Iran’s president dangled the carrot of further cooperation in key regional issues if the nuclear issue was solved, and this can now happen. Iran is key to any diplomatic solution in Syria, and has close ties to Iraq and Lebanon.

The aggressive posturing in the Middle East from the rival Saudis, who are seeking to assert their strength in the region, is in a large part due to Iran’s coming in from the cold following the nuclear deal. The Saudis are scared of a resurgent Iran and what this means for their own position in the region, but it need not end in conflict if they accept that Iran has to assume its rightful place in regional politics. Caution and pragmatism from both sides could have a real positive impact in the Middle East at a time when stability is desperately needed.