OU News
You are at:Home»Arts and social sciences»Psychology»To say the OU changed my life is an understatement

OU student David Breakspear had been in the criminal justice system since he was a child. Determined to break the cycle, he began studying during his sentence and is now an active and passionate campaigner for criminal justice and social reform, using his experiences to help inspire and educate others.
As one of the speakers who took part in the TEDx Open University event on 8 November, we asked David to share his story.

“In 2015, I found myself homeless and living in a church doorway. I was relying on soup kitchens for food, my drug use got worse, and I was in a bad, bad way. I knew I should not be living this life.

I realised, you might say it was an epiphany, that there was only one place to go to change my life and that was back to prison. I knew I had to go back for the right reasons though.

I’ve been in prison before and have been a prison reform campaigner. But I have also been a criminal. I never really focused on what I wanted to do with my life, which is why I kept making mistakes.

Believe it or not, I was a better person when I was in prison. I had more tolerance, more patience, more empathy and could be more understanding. At that time, I had more of a social obligation when I was in prison than when I was in society. Being institutionalised builds that sort of feeling. So I knew prison was the perfect place to not only work on myself but to begin rebuilding relationships with my family and children, without the temptation of making any mistakes.

I wanted to campaign for prison reform, and I realised that the best way to achieve this was to go down the degree route. I had the skills and experience, but I wanted to learn how to best build my argument in an intelligent way, so that the people I wish to influence would understand me.

I began, whilst on remand and with funding from the excellent Prisoners’ Education Trust, with an access module. I then began studying for an Open University BSc Hons degree in Criminology and Psychological studies while still serving as a prisoner.

I started out quite tentatively in what I was doing. You have to understand that I never really went through the education process before and was kicked out of school aged 14. I was lackadaisical in my attitude and questioned whether I could do it. Well, completing a module showed me that I could!

I was released on 9th June 2017 and completed my licence in April 2019. I am still studying in the community now that I am free. It has been a change and I admit, when I first logged into StudentHome I did feel overwhelmed and buried my head in the sand. I spoke to some fantastic people in student support about the mental health side of things and decided to continue with my course and give it another go. In the meantime, I’ve been doing OpenLearn short courses to keep my nose in and help me navigate studying online with less pressure. I’d love to contribute to one of the courses on there!

‘Life-changing’ is an understatement 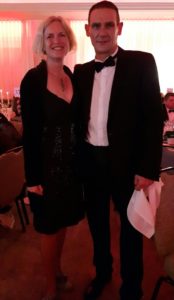 To say that embarking on the education journey I chose changed my life is an understatement. This is the first time, from the age of ten, where I have never had anything to do with the criminal justice system. Well, except for my voluntarily jumping back in to help campaign for reform! 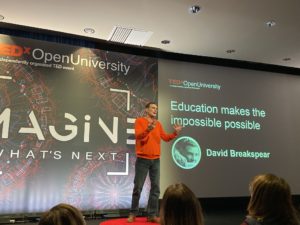 Something that I said in my TEDx talk is: how can we expect people in prison to change their lives around if there is no hope at the end of it?

I want my journey to give others hope. To think, ‘wow this guy has been kicked out of the education system at 14, went through all of these systems, and there he is at the end with a degree and a book’.

I love using my stories and experiences, both negative and positive, to inspire and influence others. I think it goes to show that the prison system can work. I always say, I am who I am because of prison, not in spite of it.”