OU News
You are at:Home»Student stories»“Remember that you are a person as well as a carer” – applications remain open for the OU’s Carers Scholarships Fund

With a reported 6.5 million people providing unpaid support for a family member or friend, it’s important now more than ever that we recognise the incredible work of the caring community.

Last month, The Open University opened applications for its Carers Scholarships Fund, which offers the opportunity for 50 current or recent carers to study with the OU for free. OU graduate, Jane was a full-time carer to her son, who was diagnosed with Down’s Syndrome at birth. Jane, like many other carers, found her time was occupied caring for her son, whilst juggling other things, which for her was working and being a mother to her youngest. Jane decided to study with the OU to gain back some precious “me” time, giving her a moment of her day just for herself.

Whether for personal satisfaction or for your career, studying should still be an option as a carer. With specialist support and flexibility that fits around your responsibilities, the OU opens the door to higher education. There’s still time to apply, with applications open until the 31 July and the option to defer your start date to September 2021.

Be inspired by Jane’s story, which she tells below, to consider your ambitions and tap into your potential:

“I failed my A Levels as I struggled with formal learning and was fortunate enough to secure a position on a nursing course after finishing school. However, I quickly realised that nursing wasn’t for me and decided to retrain as a typist. I went to the local college and did a Higher Diploma in Administrative Procedure, which eventually led to my role as a senior administrator in the Child Protection Review (CRP) team at Peterborough County Council – I held this position for 12 years. 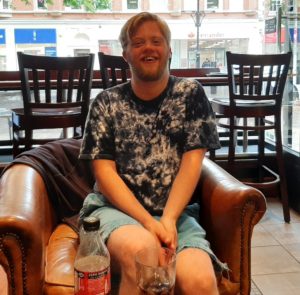 I gave birth to my first child whilst still working at CPR, and even though he was diagnosed with Down’s Syndrome, I was able to go back to work after four months, as I had the support of a social worker, fantastic child-minder and extended family to help with care. Seven years later and my second son arrived – having two children was tougher, particularly with my eldest’s disability. I made the decision to become a full-time mother and carer, as two children in a child-minding placement was not financially viable, especially when my son with Down’s Syndrome needed a separate specialist placement. My day was filled with hospital appointments and speech therapy, as well as all the other duties that come with being a parent.

I desperately needed something for myself. My mother suggested I investigate The Open University (OU), as I had always liked art history. I settled on a BA Honours Degree in Humanities and History and was excited to start on this new adventure. It was difficult to dedicate time to my course, especially trying to fit studies around school pick-ups, the children’s homework and caring responsibilities, but the flexibility of the OU, meant that I was able to study when best suited me.

In 2013, I suddenly lost my sister, shortly followed by my mother a year later. Whilst struggling with the aftermath of this devastation, my eldest son was diagnosed with Graves’ disease, which is an autoimmune disorder that causes hyperthyroidism. He was desperately ill and had to have an operation to remove his thyroid, with lots of hospital visits and treatment. Studying took a backseat, as I needed to care for him and support his recovery. I discussed the situation with my tutor, who was able to grant me an extension on my upcoming TMA, which helped me catch-up on the module in time for my exam at the end of term.

It was a long process, but a rewarding one. I graduated in 2015 and made sure I could attend a graduation ceremony in Birmingham, so that my sons, brother and best friend could join. It was a wonderful day. 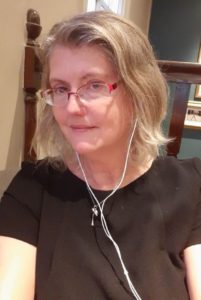 Since completing my OU studies, I’ve toyed with being a teacher, but couldn’t face the additional PGCE training to make this happen. So, in 2018 I began volunteering as a historical researcher with Nenescape, a landscape partnership team which brings together partners from along the River Nene between Northampton and Peterborough to celebrate, protect and conserve the natural and built heritage of the landscape. Through the team I was introduced to the British Museum-run, Portable Antiquities Scheme, which encourages the recording of archaeological objects.

I’m really proud of both of my roles and have even started volunteering with another charity called Light Project Peterborough, working with the local council to provide shelter and support for the homeless. This part of my work really inspires me and I’m now looking for a permanent role in this sector.

I would recommend the OU to anybody, it’s opened so many doors for me. Giving up was never an option, as I knew I wouldn’t get a second opportunity like this. It’s been something just for me, which in turn has kept my brain active and enhanced my CV.  For anyone who is a carer and are wondering whether the OU is the right option, my advice is to just give it a go, and remember that you are a person as well as a carer.”

The OU’s Carers Scholarships Fund is now open for applications until 31 July 2020. We will provide 50 UK-based carers with funding so they can pursue higher education. Given the current circumstances we are flexing our study start dates so if applicants are successful, we can hold their place until the next academic year in September 2021. The OU’s unique flexibility means carers can study around their caring responsibilities and receive tailored advice and support.

If you’re struggling at the moment, supporter of the OU’s Carers Scholarships Fund, Carers Trust provide guidance and advice to help you through this difficult time