OU News
You are at:Home»Science, maths, computing and technology»Engineering»OU student to Professor of Engineering Education

Carol Morris was advised at school that university wasn’t the path for her. 10 years later her doctor recommended studying a short course with The Open University, which sparked an interest in learning and inspired Carol to sign up for the OU’s famous Open Degree. Mixing maths with science modules, Carol was able to complete her BA before embarking on a degree in electronic engineering at The University of Sheffield, whilst juggling caring for her two young sons. Even before she’d graduated, Carol had been hired by the OU and today she celebrates her recent promotion to Professor of Engineering Education. As we mark International Women in Engineering Day (23 June), Carol talks us through her journey to Professor and how the OU helped her reach this goal.

I did well at Junior School and passed the 11+, which got me a place at a local grammar school. While I was okay up to O-Level, I struggled at A Level, and was told not to bother applying for university. I took my teacher’s word and did an HND instead in Chemistry at Sheffield Polytechnic – I hated every minute of it, as I went from an all-girls school to being the only girl on the course. However, I did complete my studies and went on to spend five-years in industry before my first child was born. This was another culture shock, as I was now spending a large amount of my time caring for a child. In a routine appointment with my GP, I was recommended The Open University. I started with a short-course on childcare, which inspired me to try maths and physics again. In 1982, I enrolled on the Science Foundation course, and two weeks after my second son was born, I took my first exam.

There was always a little demon sitting on my shoulder that said ‘you’re not good enough for university’ – I wanted to prove everyone wrong and the OU was a way to do that. 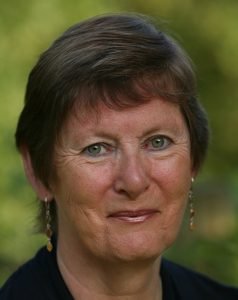 The OU was fantastic, they even came to my house to invigilate my exams – giving me time off to feed my son. I continued to study for another five years with the OU on an Open Degree. At the time the OU didn’t offer a course in engineering. As this was where my interest lay, I used my OU degree to apply to Sheffield University to study electronic engineering – the rest is history. I went to Sheffield University when I was 32, when I had two small children – looking back now, I have no idea how I did it, but I was really determined. I knew that I didn’t want to go back to the work that I’d been doing – working in the paint lab at British Steel Chemicals. Studying was my way out, and I knew at that point that I wanted to go into teaching in higher education.

I started working at The Open University in 1989, before I’d graduated from Sheffield – I was given a very lucky break by two staff tutors in the Yorkshire region, who hired me to tutor a physical science course. In 1992, I began working for the OU full-time, as a staff tutor in the West Midlands regional centre.

Initially it was maths that made me want to get into engineering – I’d failed A-Level maths, and there was a little bit of me that wanted to crack it. When I’d been younger, I’d really loved maths and solving problems, and there was a part of me that wanted to prove to myself that I could do it. I mixed my courses with some physics modules, as I was interested in how small things worked, in terms of electronics. It’s all the little things that add together that makes you think something is interesting – it’s the best decision I ever made to start studying.

My OU tutors were incredible people, one that I remember particularly was my maths tutor. I just thought that if I could be like him, and explain things as clearly as the way he did, that would be great.

Realising that you’re capable of so much more, that was the great thing about studying at the OU for me. There was such a lot to learn and it was really interesting – it opened my eyes.

Being promoted to Professor is a massive achievement – it’s still sinking in! When I joined The Open University as a Staff Tutor, it wasn’t a route that was available. It’s only in the last three or four years that the teaching route to promotion has been opened up and becoming a Professor was a possibility. I’m delighted and I hope that there will be more of us promoted on the teaching route. For me at this stage of my career, it’s a great combination of all that I’ve worked towards. It’s fantastic and I still don’t quite believe it.

Oh my goodness – I’ve been promoted to Professor of Engineering Education @OpenUniversity This will take some time to sink in. I’ve not had a conventional academic career – told at 17 not to apply to uni. Discovered the OU at 25 which changed my life

It’s given me more confidence, that someone has recognised that I have expertise in this area.

For any woman that wants to get into STEM subjects, whether that be engineering, science, technology or mathematics, just do it – in my field of engineering, it’s a fascinating career, it’s wonderfully creative. There are stereotypes of the hard helmet and high-vis jacket, which isn’t representative at all of the profession. There’s lots that women can bring to STEM, and the more diverse the team members are, the better solutions we will get. Take every opportunity that is offered to you, even if you’re not quite up to it. Sometimes I’ve held back because I don’t fit every part of the specification, but dive in and you will surprise yourself.

Like a lot of industries, there is still a lot that needs to be improved in terms of diversity in Science – talking to our own students, there are incidents that happen in the workplace that are not very nice, sometimes there’s sexism that might be very low level, but it’s constant. I think you need to have a critical mass of women before it starts to improve. I’ve seen in my own school, Engineering and Innovation, where when I started in what was then the Technology Faculty, there was a handful of women out of 80-100 staff, now women make around 40% of the academic staff – it’s made a huge difference to the atmosphere in the school and to the way that we operate. If we can get more women in gradually, things will get better.

The OU has always been at the forefront of equality and diversity – we’ve changed enormously from when I started. We’ve been at the leading edge and I think that’s why we have a lot of women in the STEM Faculty. It’s a supportive environment, we’re very good at backing each other.

About Engineering courses available at The OU