OU News
You are at:Home»Science, maths, computing and technology»Talk about distance learning – the OU student tackling climate change in Antarctica

Alex Coniff, 29, is taking supported distance learning to a whole new level by studying for his Open University Engineering degree while tackling climate change in Antarctica.

Alex works as a facilities engineer for the Rothera Research Station, the largest British Antarctic facility based in the Antarctic Peninsula. His role sees him spend long periods of time based in the one of the most extreme climates in the world. Thanks to the flexibility of OU study, Alex puts his passion for climate science and new skills into practice despite the geographical boundaries.

“[The OU] is peerless when it comes to distance learning,” says Alex. “I knew that I was going to be working overseas and I knew that I wanted to work internationally. That’s what drew me to the OU because I knew would be in safe hands.”

A passion for our planet 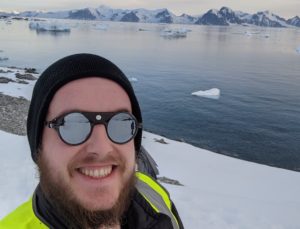 Alex spends long periods of time at the Antarctic base

As an engineer at the forefront of global warming research, Alex is helping to bring about positive environmental change. He’s now seen first-hand how fragile our planet is:

“I’m the deputy facilities engineer for the Rothera Research Station. It’s very poignant when you’re here on the Antarctic peninsula, which is one of the fastest-warming places on the planet. The station is important because it facilitates critically important environmental science. Contributors from all around the world come and use this area. It’s full of wildlife and amazing marine wildlife. As a facilities engineer, our main focus is to keep the life support systems of the stations running to facilitate the science. We keep it habitable for people in the extreme climate.

“I think it’s critically important to foster a generation of environmentally-minded students who can engage with STEM subjects. We cohabit this planet, it’s the only one that we currently have so we need to be able to innovate, develop, design and build new technologies but without destroying the environment in which we live.”

The possibility to study Engineering anywhere

Alex joined the OU immediately after finishing an apprenticeship with the British Army in 2016. It was during his service that he got his first taste of studying around the world:

“I was deployed to Cyprus, then Iraq. I continued my studies throughout, which is one thing I cannot praise the OU for highly enough.

“The main benefit for me is that the OU is super flexible. I’ve been able to complete my studies wherever I’ve been in whatever part of the world. The OU allows good work-life balance, meaning I’ve been able to progress academically and gain career experience at the same time.”

Although he’s on the other side of the world, where temperatures can sometimes plummet to – 20°C, Alex says he still has the support needed to succeed in his studies:

“There’s an online library where I can access anything I need and especially if I am somewhere remote. Whenever I’m deployed away, I immediately message my tutor, explain the situation and form a plan. One time, I had a paper due the next day and I’d forgotten to check a certain thing about one of the questions. I messaged the student WhatsApp group to see if anyone knew and then I also messaged the tutor, and the tutor beat the WhatsApp group!”

‘Studying Engineering has given me such confidence’

Like many students, Alex says his outlook and confidence have completely changed during his studies:

“After taking my first steps into a degree with The Open University, I realised that [engineering] is something that not only myself but anybody is capable of. It’s given me such confidence and allowed me to operate in some of the most harsh and remote environments in the world. That sort of self-belief that I can do it and I can contribute, is something that everybody deserves to have.

“There’s literally not a day goes past in my job where something I’ve recently studied comes up and I have to use it – situations where I’ve been tasked with a job or have to react to something that’s broken.”

After completing the final year of his degree, Alex has his sights set on achieving a Masters. He’s eager to continue using his engineering skills to create positive change.

Generation change: The ones to watch

OU students aren’t just changing their futures – they’re helping to change the world. Alex is featured in a new ‘Ones to watch’ series with MTV Generation Change. The series showcases the OU students who are using their qualifications to make a difference to people and the planet. You can watch the #GenChange episode now with presenter Munya Chawawa.

Carly Sumner Sinfield is a Communications Manager at The Open University. She loves telling stories and has spent the past 10 years writing about everything from nappy bags to balance transfers. She holds a BA (Hons) in Journalism and Media Studies and is currently studying an MA in Creative Writing. When she’s not writing, Carly enjoys reading, sharing good food with great people, and all things colourful.