OU News
You are at:Home»Student stories»Cindy’s story: “Anything is possible”

In 2003, Cindy Vanstone’s world was turned upside down. Her son was diagnosed with hydrocephalus and needed care around the clock, causing Cindy to give up work and care for him full-time.

“Before then, my life would have been considered pretty normal,” says Cindy. “I had a good job in finance, a beautiful daughter and a comfortable life. Everything changed after that.”

“My son and I went through battles for support and I knew my marriage was failing. I was constantly ill and classed as disabled too.”

Despite so many obstacles, including the end of her marriage, Cindy was determined to use her time to make a positive difference to those around her.

“I was inspired by my daughter to take up a degree in politics, as this has always been of interest to me. Just before I started studying with the OU in early 2013, I was involved in a national demonstration, which gave me food for thought and I knew I needed to do something to make my life worthwhile.” 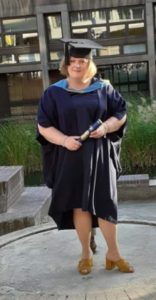 Cindy Vanstone at her degree ceremony

Cindy began studying for a Bachelor of Science (Honours) Open degree in 2014 and despite her passion for politics, she describes feeling daunted about returning to education in her forties:

“The idea of obtaining a degree scared me. The only study I had ever done since my O Levels was to become a Registered General Nurse, 26 years previously. However, I took a step back and said to myself ‘I can only do my best’ and that was the beginning of my lengthy OU path.”

Despite her determination, Cindy admits that juggling her studies with her family, voluntary work, caring and the pain of her illness was a constant battle.

“As a single mum, it was a daily struggle to get through what life threw at me, as well as studying when I could. My son was becoming increasingly challenging, as his behaviour was both violent and disruptive.”

“Through it all, I managed to just about survive and successfully completed level two of my module. Special thanks to a couple of amazing OU Associate Lecturers who supported me.”

Halfway through her degree, Cindy begun a new relationship which she describes as her ‘saving grace’. “I finally had the support I needed to complete my degree,” she says.

Following over four years of hard work, Cindy was delighted to collect her degree in September 2019, surrounded by family and other proud OU graduates.

“It has to be the best day of my life. I felt elated and complete and extremely proud of my achievements. I am already thinking of further study and expanding my knowledge with a Masters – watch this space!”

For anyone else thinking of studying or who is facing hardship, Cindy offered the following words of encouragement:

“It CAN happen! Life is an unpredictable journey, but anything is possible if you want it enough! Only you can make it happen, I did! It is never too late to learn and the OU helped open my mind to the world around me and to see things differently. I am a totally different person now than before I started to study.”

About our guest author