OU News
You are at:Home»Science, maths, computing and technology»Unimaginable: The first scientist to confirm and identify extremely rare meteorite that fell to Earth

Just over a week ago on Sunday 28th February at about 10pm a bright fireball lit up the sky. This was seen by over 1,000 eyewitnesses across the UK and northern Europe and the event was captured on meteor cameras and home surveillance systems. This created a flurry of excitement in the hunt for any debris that had survived and fallen to Earth, explains The Open University’s By Dr Richard Greenwood, Research Fellow, Planetary Sciences… 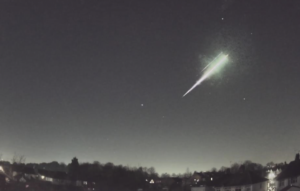 The fireball as it fell to Earth last Sunday.
Picture credit: From a video by Ben Stanley, processed by Markus Kempf, the AllSky7 Network.

“We were able to use data from the UK’s meteor camera networks and, working globally with teams in France and Australia, were able to triangulate the path and calculate a trajectory for the fireball. This allowed us to coordinate and identify a 300 square kilometre area where this meteorite could have fallen. It was clear that the meteorite had landed in Gloucestershire, close to the town of Cheltenham. Now the hunt was really on!

The media covered the story and scientists appealed to the public to send in any images that might show this fallen meteorite. We were able to visually identify possible sightings and one stood out amongst all the others. It was this image that led to the small medieval market town in the Cotswold hills, called Winchcombe.

We needed boots on the ground quickly and fortunately for me I live in Oxfordshire. I tracked down a number for the individual who had sent in the photograph and managed to get hold of him and we agreed to meet later that afternoon.

I parked my car outside a house in a quiet residential suburb of Winchcombe and went to meet the owner. He handed me the rock he had collected on his drive.

I was in shock when I saw it and immediately knew it was a rare meteorite and a totally unique event. It’s emotional being the first one to identify it conclusively and confirm to these people standing in front of you that the thud they heard on their driveway overnight is in fact the real thing.

Working quickly with the Natural History Museum we located as many fragments of the space rock as we could to ensure that the meteorite came under the Museum’s care. At the OU we were the first to test some of the fragments. 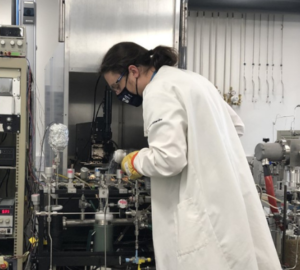 The oxygen isotope analysis undertaken by OU PhD student Ross Findlay, confirmed that the meteorite is a very primitive type, known as a carbonaceous chondrite. These are really important meteorites. They are old, having formed just at the start of solar system history, 4,567 million years ago. They contain a rich mix of organic compounds, including amino acids and alcohol! Some scientists even suggest that the building blocks for life were carried to Earth by these meteorites. They even contain grains from stars that existed before our Solar System formed.

Recovering fresh material from such rare meteorites is a really significant moment for science. The calculated orbit show that it originally came from the outer asteroid belt. Further analysis will certainly reveal new insights into the processes that took place at the very start of our Solar System.

Just to put this into perspective, NASA and the Japanese Space Agency JAXA have paid billions to get samples of these materials back to Earth and now the UK has it for free! The search continues in the surrounding area. Specialist scientists, alongside those from the OU, including colleagues from The University of Glasgow, The University of Manchester, The University of Plymouth and Imperial College London, have found further fragments of the meteorite.

Records of meteorites being recovered in the UK go back to the Stretchleigh meteorite in 1623. Despite having samples from over 20 meteorites that have fallen in the intervening years, the UK has never had a carbonaceous chondrite, until now. In addition, this is the first recoded meteorite fall in the UK in 30 years.

Back then, ironically, I was working in the Natural History Museum and took the call from a local astronomer that led to the identification of the UK’s previous meteorite fall that landed in the picturesque village of Glatton, near Peterborough. My boss at the time headed off and did the formal identification, and a few days later, alongside colleagues then working with the late Professor Colin Pillinger at The Open University, we hunted the local area looking for other pieces. To no avail! 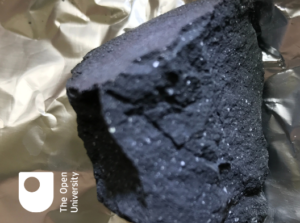 So, in the last few days, I have had the feeling that things have sort of come full circle for me. Working, as I do, in the field of planetary sciences, to have had the opportunity to be the first to identify this meteorite is literally a dream come true. I never imagined in a million years I’d be able to tell this story.

Without the collaborative effort of the camera networks, international partners and all the scientists involved we wouldn’t have been able to calculate where this meteorite landed so quickly, as well as where it originated from in the asteroid belt. Being able to do such calculations is a rarity and we only have this information for about 40 of the 65,000 meteorites on Earth.

This carbonaceous chondrite meteorite, likely to be known as the Winchcombe meteorite, is extremely rare and will be the target of an unprecedented research effort providing answers to questions about the early history of our Solar System. At The Open University we are at the forefront of this exciting endeavour. So watch this space, for further updates.”

Richard was able to respond so quickly because the COVID Recovery Group pulled out all the stops to sort out the required risk assessment and permissions  – so huge thanks to them for their part in getting this scientifically priceless sample into the national collection.