OU News
You are at:Home»Science, maths, computing and technology»Space»One step closer to building habitats on the Moon

A team of lunar scientists from The Open University (OU) and the European Astronaut Centre (EAC) are making advances in building permanent structures on the Moon’s surface.

The future of space exploration

Maintaining a long-term presence on the Moon is the next step in space exploration, but building a habitable structure using materials from Earth is difficult due to cost and logistics. By using surface soil, one of the most widely available resources on the Moon, the team have found a viable alternative.

“The lunar surface is very different, and there is the issue of no atmosphere and microgravity, so we simply cannot use our old technology and materials – such as mixing cement and water to make concrete for building on the Moon. Instead, we have to use new technology, which is appropriate for the lunar surface environment.”

To test the theory, the OU-led team used a lunar simulant called JSC-1A, developed by the NASA Johnson Space Centre (JSC), which mimics soil formed by ancient volcanic eruptions on the Moon. 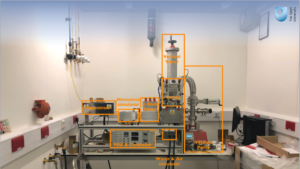 Experiments involved heating the soil up to melting temperature in excess of 1,200 oC, under various input powers from 250 to 1,000 watts (W), using a bespoke industrial microwave. This allowed the team to assess whether microwave energy and lunar soil could provide an adequate foundation to develop an extra-terrestrial construction method and material on the Moon.

“This experiment demonstrates that microwave energy and lunar soil are useful in fabricating construction elements such as bricks, pavements, dust protection wall and a (micro)meteorite cover, which can protect astronauts from the potentially hazardous environment so they can continue their mission on the Moon.”

Now with a viable resource, the team will look to develop a microwave heating-based 3D printing technique as part of an extra-terrestrial construction process to support permanent settlement on the Moon and Mars.

Currently, Dr Lim is working on a UK Space Agency funded project to develop payload concepts that could be deployed on the European Space Agency’s European Large Logistic Lander (EL3), which is planned for launch between 2027 and 2029.