OU News
You are at:Home»Science, maths, computing and technology»Space»Chinese Moon landing: what we could learn from this historic mission

Last week a Chinese space mission made history when it landed on the far side of the moon and sent back images of this mysterious lunar territory. 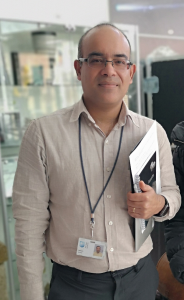 Here Dr Mahesh Anand, Reader in Planetary Science and Exploration at The Open University explains the significance of the mission and why it could lead to more.

Chang’e-4 landing is a first for space exploration

No other space-faring entity has ever performed a controlled landing of a spacecraft on the lunar farside.

The geology of the farside of the Moon is very different to that of the nearside. The terrain is much more rugged and is covered by numerous craters (and mountains some of which are higher than Mount Everest!) that have formed through impact bombardment by asteroids and comets since the formation of the Moon ~ 4.5 billion years ago.

The farside of the Moon also hosts one of the oldest (>4.2 billion years) and the largest impact basin (~2500 km in diameter) in the Solar System, called the South Pole – Atkin (SPA) Basin which could have breached the lunar crust and exposed the mantle below.

This could be our only direct view of the lunar interior – important for understanding the chemical and thermal evolution of the Moon.

Our understanding of the formation of the Moon is incomplete

The melt sheet formed during the SPA basin creation could contain evidence for the nature and composition of impactor(s) that might have also affected the ancient Earth.

We do not yet have any direct sampling of the lunar farside and therefore, our understanding of the formation of the Moon, its geological evolution remains incomplete.

For a sustainable future exploration of the Moon and the wider Solar System, it is important to develop technologies that could utilise local resources to reduce the need and cost of bringing ‘supplies’ from the Earth (e.g., water and breathable oxygen). In this context, Chang’e-4 will provide crucial information about the nature and composition of lunar regolith which could be used as a resource for supporting future human presence on the Moon.

China is ‘quietly’ developing a track record in successfully landing on the Moon and in this respect, it was not a surprise that Chang’e-4 landed successfully. However, given that it was a first ever controlled landing, using automated navigation in the final stages, on the farside of the Moon and the communication of this amazing feat to the Earth was dependent on the successful transmission of the data by the Queqiao satellite that China launched some 6 months ago, it was a pleasant surprise that everything worked out as smoothly as it appears to be the case.

Once the rover is successfully ‘off-loaded’ on to the lunar surface, its first challenge would be to adjust to the thermal conditions and the vacuum of space at the landed site. Then, the trafficability will be a major concern as the lunar regolith contain fragments of rocks of all sizes that would be an obstacle for the rover to overcome. At the other end of the size range, the very fine lunar dust could cause complications in the functioning of the rover by adhering or covering vital components, necessary for the mobility and/or instrument performance.

The rover carries a number of instruments that would return data on the local geology, regolith composition and any sub-surface structure (e.g., presence of any sub-surface layer of water-ice could be searched for in the radar data that the rover would collect). Information such as these would enable researchers to better understand the geological evolution of the Moon as well as inform strategies for future sample return missions and technological developments for utilising local resources for future human-tended lunar missions.

Space exploration is most exciting when it is unpredicatable

Our understanding of the formation and evolution of the Moon is at best half complete as until now we have only explored one half of the Moon! It is the ‘unpredictability’ element of any exploration programme that is most exciting as new discoveries are made by pushing the limits of our knowledge and understanding of the natural world. It will not be surprising if the future exploration of the lunar farside, heralded by the Chang’e-4 landing could necessitate a paradigm shift in our understanding of planetary formation in our Solar System (and potentially other exoplanetary systems as well!).

It is worth highlighting the unifying role of space exploration for the humanity. As we celebrate the 50th anniversary year of the Apollo 11 Moon landing, the emergence of new space players is paving the way for the next 50 years of space exploration that is likely to see humans utilise the Moon as an outpost to explore the far reaches of the Solar System.

Dr Anand’s research work has spanned geological studies of ancient igneous terrains on Earth to diamonds to lunar, Martian and other meteoritic samples. His recent research has focused on understanding the history of volatiles in lunar samples, specifically, the abundance, distribution and source(s) of water in the lunar interior. Mahesh has been involved in supervising over 25 PhD students and postdocs and has published over 70 peer-reviewed papers in journals of high-scientific standing.

Christine is a manager in the Media Relations team within the Marcomms Unit at the OU. She is an experienced national BBC journalist, sub-editor and news editor and has a background in regional newspapers. After moving to PR she worked as a press officer for the Zoological Society of London. She is doing an MA in Philosophy with The Open University; she focuses on FASS stories and widening access in HE. Chris swims regularly and has a pet tortoise called Lightning.