OU News
You are at:Home»Science, maths, computing and technology»Science»Rosetta: Surprising results from analysis of comet gases 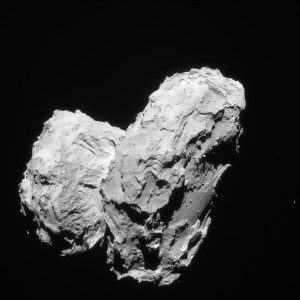 New results from Ptolemy – the OU’s instrument on the Rosetta mission’s Philae lander – show a variance in gases coming off the comet’s surface at different locations. The new data helps researchers examine how comets are formed, and indicates that the comet was formed from different building blocks giving it a rich and diverse nature.

Dr Andrew Morse, lead author on the paper, said of the findings: “though it’s a possibility that carbon monoxide is produced as it moves away from the comet, a more probably account of such a large change would be that the gases released from the comet’s surface differ according to location.”

“Our results have surprised us as well as opening up a variety of new questions about how comets form and how they work. We’re eagerly awaiting new results which should help us clarify if Comet 67P is diverse and varying in nature, or if there’s another explanation. Either way, these results offer up an important piece of the complex, yet fascinating puzzle of how comets are formed.”

Co-author Geraint Morgan added: “This shows the value of landers, even high-risk ones, in establishing a ‘ground truth’ measurement on the surface to compare with on-going data from orbiting spacecraft. Despite Philae’s eventful journey, the data produced could be the key to help the Rosetta mission unlock the secrets of the Solar System.”

Find out more about the Rosetta space mission and watch this series of animated videos.

The Rosetta Mission from Royal Observatory Greenwich on Vimeo.