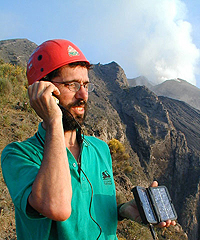 “The volcano Agung might at last be delivering the large eruption that has been feared for several weeks.  Ash is rising to a height of about 30 thousand feet, and dispersing east and south taking it over Bali’s international airport, which has had to be closed.  Airborne ash is a serious hazard to aircraft.

“The wisdom of the Indonesian authorities’ decision to evacuate residents from around the foot of the volcano will be apparent if there is substantial ashfall or, worse, a collapse of an eruption column resulting in fast-moving pyroclastic flows.  Airfall ash is a respiratory hazard, kills crops, and makes roofs collapse, and can turn into devastating mudflows (lahars) as soon as it rains.  Pyroclastic flows are hot and deadly.

“Most of the volcanoes in Indonesia, including Bali, are there because the ocean floor of the Indian-Australian tectonic plate is being pushed below (subducted) the plate carrying Indonesia.  This is the process that causes the earthquakes in the region.  Most of the magma that feeds the volcanoes is produced because the seawater that is carried down by the subducting plate escapes and lowers the melting temperature of the rock below the islands.  Molten rock, rich in steam and other gases, which is what we call magma, then rises upwards to feed the volcanoes.  If the gas escapes quietly, there is not much of a problem.  If it escapes violently, then we have an explosive eruption, which is what is feared in this case.”