The discovery of an incredible prehistoric site containing the remains of animals that lived in a tropical sea has been made by chance in a farmer’s field in Gloucestershire.

Contained within hardened limestone concretions in clay, the three-dimensionally preserved remains of ancient marine reptiles, fish, squids, rare insects roughly 183-million-year-old have been revealed for the first time by a team of palaeontologists who excavated the site in search of these remarkable creatures.

The newly found site is at Court Farm near Stroud, Gloucestershire owned by Adam Knight and was discovered by Sally and Neville Hollingworth, avid fossil collectors who recently uncovered the remains of mammoths in the nearby Cotswold Waterpark which was featured in the BBC One documentary “Attenborough and the Mammoth Graveyard”. 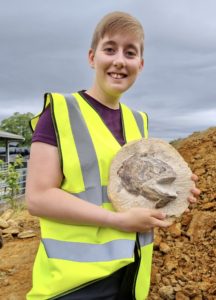 “My PhD research is focused on how insects were affected by a period of extreme environmental change that occurred during the Toarcian. To do this, I’ve been studying fossilised insects from rocks of this age that have been collected over the past 200 years and are now in museum collections.

“Although insect fossils at Court Farm are seemingly rare, further research at this site and surrounding Gloucestershire localities might help us to work out the abundance and diversity of insects during this time and help us to understand how this environmental change influenced insects”.

Earlier this year, Emily was also involved in another exciting excavation – the unearthing of the largest, most complete marine reptile skeleton ever found in Britain, at the Rutland Water Nature Reserve.

Many of the specimens from Court Farm will be donated to the local Stroud Museum where they will form a significant part of the museum’s palaeontology collections.

Field observations and preparation of the fauna found to date indicate that the Court Farm fauna was rapidly buried, as suggested by the absence of any encrusting animals or burrows in the sediment. The layered concretions around the skeletons formed relatively early before the sediments were compacted, as the original sediment layering is preserved. These concretions prevented further compaction and compression from the overlying sediments during diagenesis and thus preserved the fossils in three dimensions.

Dr Dean Lomax, a palaeontologist and a Visiting Scientist at the University of Manchester, who recently led the excavation of the Rutland ichthyosaur, was part of the team also said:

“The site is remarkable. Inland locations with extraordinary fossils like this are exceedingly rare in the UK. This site represents a unique time capsule. It will surely form the basis of research projects for years to come.”

The team will continue to analyse the findings and publish their research with the specimens planned for display at Stroud Museum and at the Boho Bakery Café at Court Farm, Kings Stanley, Gloucestershire.

Laura is a manager in the Media Relations team at The Open University. With extensive experience in PR and media management, she has led on external communications for a broad range of organisations, from global brands to local government. Prior to joining the OU, her work on high-profile campaigns included public health, education, finance and more.