OU News
You are at:Home»Education, languages and health»Health»Truth about surrogacy explored in new series

The first episode of a new series exploring the reality of surrogacy starts tonight (17 March) on BBC One at 10:45pm. Co-produced by the BBC and The Open University’s (OU) Broadcast and Partnerships team, Surrogates is a three-part documentary, which follows the experiences of five young British women, all embarking on a complex journey to have babies for other people. 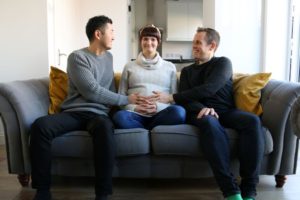 The series, which was filmed over 18 months, aims to uncover the taboos associated with being a surrogate and a prospective parent. At 24, Emma is the youngest surrogate featured. She gave birth to baby Mia, now aged one, in March 2020 for partners Kevin and Aki, a couple she met through an app that matches surrogates to wannabe parents. Her full interview is available on the BBC site.

“It’s kind of like Tinder for fertility, you can swipe left and right on people’s profiles. People are on there looking for sperm donors, egg donors and surrogates. I matched with quite a few people, but Aki messaged me first and we just hit it off straight away. Then about three weeks later, they came to see me where I live, we went for a meal and chatted for hours. We’re such good friends now, I see them like extended family.”

As part of the OU’s role in the series, academic consultants, Lesley Hoggart, Professor of Social Policy Research and Dr Sarah Earle, Senior Lecturer, have been involved in advising and shaping the script. 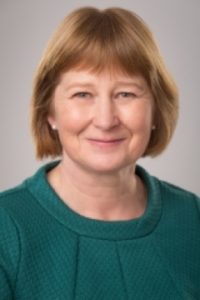 “My colleague, Sarah and I are experts in the field of sexual and reproductive health and are both members of the OU’s Reproduction, Sexualities & Sexual Health Research Group. Throughout the making of the series, our knowledge was used to ensure that any information about the surrogacy journey was correctly interpreted. We also supported in producing extra resources about surrogacy, which can be found on the OU’s free learning site, OpenLearn.

“The programme provides a fantastic insight into what the surrogacy journey really entails. A great watch, which we both thoroughly enjoyed being a part of.”

The first episode introduces Caitlin and her boss Kate. Caitlin is 26, a single mum, and in a new relationship with her boyfriend Jordan. Kate and her partner Matt have lost three pregnancies, including one at 32 weeks. Meanwhile we also meet 23-year-old Emma who is pregnant with the baby of a gay couple she met on a fertility matching app just a few months earlier; and then David, 40, is a single gay man hoping to have a child through surrogacy.

Surrogates airs tonight on BBC One at 10:45pm, with the entire series available to watch now on BBC iPlayer.

This series was commissioned by Broadcast and Partnerships and is supported by the Faculty of Wellbeing, Education and Language Studies, with particular relevance to:

To accompany the series, listen to an OU podcast exploring prenatal testing and surrogacy and learn about the world of surrogacy with articles and an interactive map. Visit: https://www.open.edu/openlearn/tv-radio-events/tv/surrogates