OU News
You are at:Home»Education, languages and health»Health»OU study ‘the catalyst for everything I’ve achieved in raising awareness of dementia’

OU graduate Gina Awad was described as average by her school teachers, something which has haunted her over the years. But her complete dedication to raising awareness of dementia within her home community of Exeter has seen her receive a string of commendations for ‘outstanding work’. She’s not so average now…

Gina created the Exeter Dementia Action Alliance (EDAA) in 2015 and has trekked the Great Wall of China to raise funds for Alzheimer’s Research UK, in addition to receiving a Pride of Devon award in 2015. She got a Lord Mayor of Exeter’s Commendation for her voluntary work, and was named Dementia Champion of the Year 2016 at the Alzheimer’s Society National Dementia Friendly Awards, reflecting on her work one year later for the Alzheimer’s Society.

And if that isn’t enough, her outstanding contribution to dementia friendly communities has seen her name appear on a list of 100 influential women in and around Exeter and a top 70 list of most inspiring women in Devon. 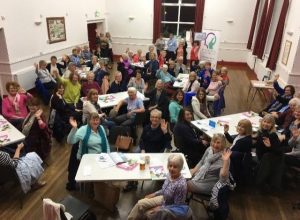 A Dementia Friends session with members of the Exminster Women’s Institute.

Gina is a ‘Dementia Friends’ champion, an Alzheimer’s Society-led initiative, having run more than 105 local information sessions, reaching 1,600 people. And she continues to present a quarterly radio show with Phonic FM on ‘Living Better with Dementia’.

She said: “My passion and motivation is and always has been, to make a difference for people living with dementia and their families.

“To raise awareness, reduce the misconceptions around the condition and promote inclusivity, understanding and compassion, whilst inspiring organisations to take action.”

“I’m passionate about raising awareness of dementia, which may touch all of us in one way or another in the future, and I feel that people everywhere – including those in government – are taking heed of what is the biggest health and social care challenge of this century.

As well as campaigning to raise awareness, Gina also studied a BSc (Hons) in Health and Social Care with the OU, graduating in 2017. Study, she says, has been the catalyst for everything she has achieved in the field of dementia.

‘Fear prompted me to study’

“It was fear that prompted me to study dementia. My grandmother delivered creative arts classes in care homes when I was a child and I used to accompany her to the sessions with my sister. 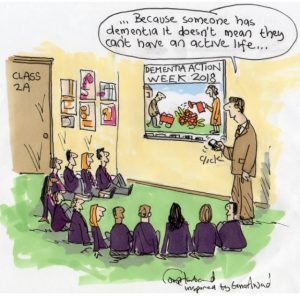 Gina has worked with cartoonist Tony Husband on a series of dementia-themed illustrations.

“During my visits, I noticed that some people were very engaged in what was going on, but there were others who weren’t. I was quite afraid and I now realise they were living with dementia.”

“I’ve always been interested in the human mind and it was a friend who first introduced me to the OU in 2009 when she was studying K101 An introduction to health and social care. She thought I would enjoy the content and structure of this module so encouraged me to register – which I did.”

During a difficult period, Gina’s family advised her to give up her studies or her dementia awareness work.

“I realised I couldn’t do either. The thought of the graduation ceremony for my diploma inspired me to continue with my studies and experience what it would be like to collect my degree award. One module in particular has also kept me going: K235 Dementia care.

“It has been the catalyst for everything I’ve achieved in the area of raising awareness of dementia in my home city of Exeter.”

Gina starts a studying for a postgraduate certificate in dementia studies with the University of Stirling in 2019.