OU News
You are at:Home»Arts and social sciences»Society and politics»Suez stranding: Containing the supply chain

As the movement of ships has now resumed in the Suez Canal since the Ever Given container ship became wedged across the waterway last month, the OU’s Emeritus Professor of politics and global studies Graham Thompson considers what this incident tells us about globalisation in today’s world. Firstly he looks back at a programme made by the OU and used for course content back in the mid-1990s, about the owners of the vessel.

“The grounding of the container vessel Ever Given in the Suez Canal for several days in late March reminded me of an Open University TV programme I was responsible for in the mid-1990s. 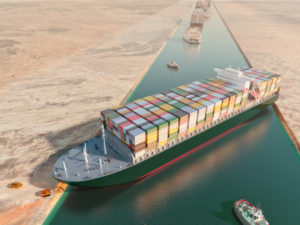 The Ever Given completely blocked the Suez Canal.

This programme – Containing the Pacific – was made for a course called Pacific Studies and involved a case study of the Evergreen Corporation, the Taiwanese conglomerate that operates the Ever Given.

The programme illustrated the nature of a typical Chinese family business, but one that had expanded to include many interrelated activities. The company is best known for its shipping business – where it operates some of the largest container ships in the world, has a shipbuilding arm, makes its own containers and owns ports in several countries. But it also owns two airlines (Eva Air and Uni Air), a chain of hotels and holiday resorts, several logistics companies and even has its own orchestra, amongst other businesses.

Supply chains and the pandemic

The Ever Given was on its way from a port in Malaysia to Rotterdam with 20,000 containers on board when it got stuck. This held up a large amount of shipping around the Red Sea and in the southern Mediterranean which led to concerns that ‘global supply chains’ would be severely disrupted if it could not be properly re-floated quicky. We have heard a lot about supply chains recently in connection to the Covid-19 pandemic since the ingredients for the various vaccines are sourced from several locations and manufacturing facilities are in different countries.

The organization of supply chains is now a hot topic for analysis by academics. Who controls the supply chain and with what effects? These are now a central element of the globalization of manufacturing and of international trade.

Traditionally the issue has been to trace the governance of these chains – where does the locus of power lie and therefore who or what gains most from them financially? The global supply chain is conceived as a series of linked stages in various discrete chains of production, distribution or wealth.

These chains involve production units, wholesalers, markets, shipping companies, retailers, banks, consumers, etc., all of which serve to link several remote stages into a global production framework. But the difficulty has been to systematically show exactly how surpluses and value are moved along these chains, from the remote periphery to the centres of consumption.

Actually, global trade may have peaked: as a proportion of global production it was in decline well before the Ever Given got stuck in the Canal.

Populist inspired protectionism and other developments are leading to a re-shoring of production to domestic territories. And is the notion of a “chain” a good one to express the complexity of global manufacturing?

Perhaps it is better expressed as a “network” rather than a simple chain. If so, this would change the focus of analysis towards a more “systems approach” to internationally integrated production. Partly technological and partly organizational, a supply system is made up of these elements and more, existing in several different registers (technological, social, organizational, legal, financial, territorial).

Whilst last month’s grounding of the Ever Given cast a spotlight on the workings of today’s globalised networks, it’s clear the issues involved go much deeper.”