OU News
You are at:Home»Arts and social sciences»Society and politics»Explainer: what you need to know about Catalonia

Expert in Spanish Politics, Dr Georgina Blakeley, who is Director of Teaching (Politics) at The Open University, explains the background to Catalonia’s calls for independence, which in recent weeks have rarely been out of the headlines, as a referendum and rallies showed the turmoil of a divided nation.

Catalonia is a region in the far north-east of Spain. It’s one of the country’s wealthiest and most industrialised regions. It’s important because it represents a fifth of the overall Spanish economy. 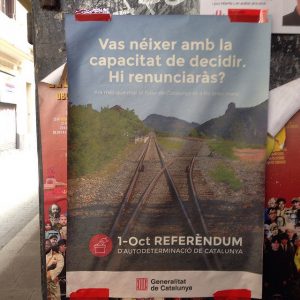 On Oct 1 there was a referendum – not recognised by the Spanish Government. The question being voted on was: Do you want Catalonia to become an independent state in the form of a Republic? Despite not being recognised as legal by the Spanish government, some 90% out of a possible population of 2.26m Catalonians voted in favour of an independent, republican Catalonia. Turnout was 42.3%.

Reason for the Vote

This issue has a history. There was an earlier referendum for independence in 2014 and like the one on Oct 1st, it highlighted the tensions between the Catalonia Regional Government and Spain’s Government in Madrid. In 2006, Catalonia described itself as a nation in its Statute of Catalonia and wanted this expression of autonomy to prompt more powers. But Spain thought otherwise and its Constitutional Court reversed much of the Statute in 2010.

It’s as much about frustration as it is about wanting independence from central state rule. Years of recession and public spending cuts after the 2008 economic crisis coupled with Madrid’s historic stubbornness to take on board Catalonians’ desire for autonomy have fuelled the fire. The rise of the Popular Party in Spain, and Prime Minister Mariano Rajoy’s heavy handed tactics on this in the period leading up to the Vote, have stoked the fire further.

The turnout was influenced by the heavy-handed police tactics used to intimidate voting and the Vote itself was dominated by those wanting independence. The campaign prior to the vote was also very short – less than a month. 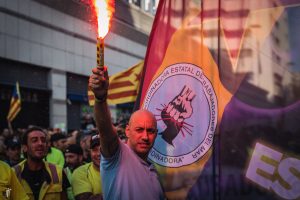 Aftermath Of The Catalonian Independence Referendum by Sasha Popovic on Flikr (C.C. 2.0)

The Referendum has triggered unrest and widespread protests, including a general strike the day after. The Spanish Government will continue to oppose the Vote – fearful it could spark others in the Basque Country or Galicia. Protests both for and against Independence have taken place including ‘white’ protests for those simply calling for dialogue.

In the event that the Catalan government unilaterally declares independence as the Republic of Catalonia, it would become a separate state and would need to apply for EU membership.  The same would have applied to Scotland had a Yes vote been successful there.  Such an application to the EU requires existing members to support it unanimously.  Spain would of course block this, as would other EU countries worried about giving a green light to separatist tendencies in their own states such as Belgium, Italy, France and, not the least, the UK.

It’s a mistake to draw too many comparisons as Spain’s historical context is crucial.

What does ring true and unites with other expressions of political discontent is a feeling of being left behind, of feeling unrepresented by distant powers whether at the level of the central state, or in the case of Brexit at the level of the EU, and, accordingly, the desire to reassert control over one’s own affairs.   Underpinning this common feeling, is a widespread sense of disillusionment with ‘politics as usual’ and a desire to regain control in the face of power-holders who do not seem to represent their voters.