OU News
You are at:Home»Arts and social sciences»Psychology»Discovering psychology led Andrew to a new career 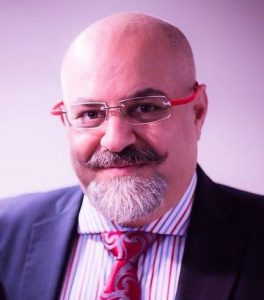 Growing up in North London, Andrew, 49, didn’t enjoy the academic side of school and left at 16 with 11 O-Levels.  After a spell in retail and a long career in IT, he made a dramatic change to his working life. After a family bereavement opened up the world of psychology to him, he decided to switch career paths in his 40s.

Awakening a passion for psychology

Rising through the ranks in his first job after school, Andrew was soon a branch manager for a jewellery store, but admits he was thinking “now what?” as he realised a retail career – despite his early success – just wasn’t for him.  He took up study and completed a Business Studies degree which enabled him to move into a corporate IT role.

Andrew says: “I had a wonderful salary, and worked in IT for nearly 15 years, but I didn’t feel fulfilled. I wasn’t making a difference.”

A family bereavement was the catalyst for change.  His wife’s mother passed away from cancer and he did everything he could to support his wife and help her through her grief.  He volunteered for Cruse Bereavement charity, and the short course he completed with them fascinated him, awakening a new passion for psychology.

It wasn’t easy – but the OU was flexible

Andrew found a new drive to forge a career in psychology, but in order to do so he had to obtain Graduate Basis for Registration, by taking a conversion course which is approved by the British Psychological Society.

Giving up work to study wasn’t an option so he looked to the OU, which produces more psychology graduates than any other UK university. The Postgraduate Diploma fitted the bill exactly and amazingly, he was able to complete it in ten months.

But it wasn’t easy.

“I would wake up at 4am to study every morning, and spend my weekends doing my OU work,” says Andrew.  “I felt so determined, and online study worked brilliantly for me.  The process was seamless, and all of the tutorials, course materials and resources were good.  The OU way to learn made life easier for me, as I could fit it in with my busy schedule.”

The OU way to learn made life easier for me, as I could fit it in with my busy schedule. 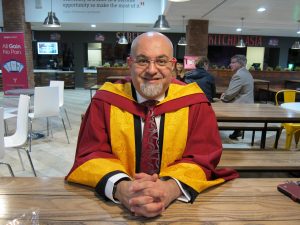 But it was worth it and he’s now working in the field he loves both in the NHS and privately.

“I’m now a counselling psychologist, and I work at an inpatient unit for the NHS helping people with varieties of difficulties such dementia, and those in mental health crisis situations. I also have a private practise too. It’s extremely rewarding; but if it wasn’t for the OU I wouldn’t have been able to take this path.

“Changing my career in my 40s was one of the toughest decisions I ever made but I am so glad I did it. I would encourage everyone to follow their passion – you just need determination to succeed.”