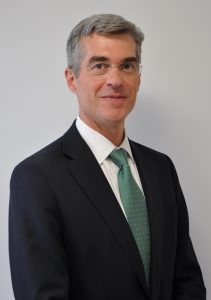 Keith Zimmerman will be The OU’s new University Secretary. Currently Director, Students, Mr Zimmerman will be the fourth holder of the role since The OU was established and will replace Fraser Woodburn who is retiring.

As University Secretary Mr Zimmerman will be responsible for the University’s governance, administration and operational management. He said: “I am excited to be starting the new academic year as the OU’s University Secretary, and I look forward to bringing my commitment to providing the best for our students to the role. I am honoured to be given the opportunity to follow in Fraser’s footsteps.”

Peter Horrocks, Vice-Chancellor of The Open University, said: “I am delighted that Keith has been appointed for this very senior role. He has been a significant figure in the Higher Education Sector for many years, and brings a wealth of student-focused experience to this very important role for the OU.”

Before joining the OU in 2013, Keith was Director of Student Administration and Services at the University of Oxford. His previous roles at the University of Exeter included that of Academic Registrar. Until he officially takes up this post he will continue to lead OU Student Services until an interim Director, Academic Services is appointed. Mr Woodburn will carry out the new role of Director, External Engagement on a temporary basis until the current recruitment to this post is completed.