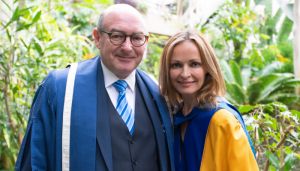 Singer, songwriter and violinist, Grammy nominee and Brit Award winner, Sharon Corr, received the title of Honorary Doctor of the University, for her exceptional contribution to education and culture.

As part of The Corrs she sold over 45 million albums and toured arenas and stadiums across the globe. Her success has continued as a solo artist, with two albums released so far. She spent two seasons as a coach on the successful talent show The Voice of Ireland, sharing her experience and knowledge of music and the industry.

“While we acknowledge Sharon’s major musical accomplishments, today The Open University celebrates Sharon’s contribution throughout her career to causes and charities that are in keeping with our mission of being open to people, places, methods and ideas. We’re not alone in recognising Sharon’s focus on helping others; she was awarded an honorary MBE in 2005 for her charitable work.”

“It’s incredibly important to listen to your dreams. You will get through – there are no obstacles, only yourself. The end result is a huge celebration and something to be immensely proud of.” 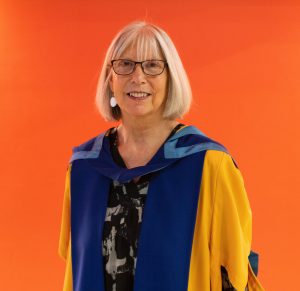 Baroness Jean Coussins received an Honorary Doctor of the University for her work in areas of special educational concern to the university.

Baroness Coussins was created a life Peer in 2007 and is a crossbencher in the House of Lords, focusing on languages, linguists and international relations. She co-chairs the All Party Parliamentary Group on Modern Languages, is Vice-President of the Chartered Institute of Linguists and President of the campaign Speak to the Future. She is an Honorary Fellow of UCL and Newnham College and was awarded the British Academy’s President’s Medal in 2013 in recognition of her work on languages.

“Like Jean, at The Open University we believe that language skills can open doors at any age – a philosophy reflected in our provision. We absolutely share Jean’s belief in the significance of language learning and honour her efforts to make this central to our way of life.”

“The Open University already provides a huge range of languages courses for fun or vocational reasons and all are really important. It’s easy to think perhaps we shouldn’t bother to learn a a language, but 75 per cent of the world doesn’t speak English and the UK needs linguists for all levels of the economy.”

Her top tip for languages students is to keep using it – on holiday, at home, wherever you can. 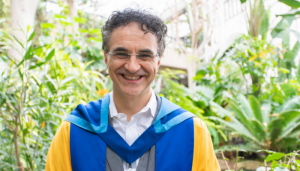 Professor Noel Fitzpatrick, known to many as The Supervet, is a pioneering professor of veterinary medicine whose ground-breaking work has saved the lives of countless animals and helped advance science, technology and medicine.

The Open University awarded him the honorary degree of Doctor of the University for his exceptionally innovative and socially responsible business developments.

Professor Devendra Kodwani, Executive Dean for the Faculty of Business and Law, presenting Professor Fitzpatrick for his honorary degree, said:

“Noel has dedicated his life to ensuring that the advancement of veterinary science and compassion and fairness for all animals go hand-in-hand. The Open University is delighted to honour his innovative research, pioneering achievements, and ability to bring science, technology and medicine to new audiences.”

Noel said, on becoming a member of the OU family:

“I am delighted to be receiving an honorary degree from The Open University, hopefully inspiring some folk that no matter who you are or where you are from, when you work hard you truly can make a difference.

Every single second you spend on the future of your education is important, because knowledge is no load to carry.”