OU News
You are at:Home»Around the OU»University news»“Being Chancellor was a great privilege” – Baroness Betty Boothroyd’s message of support as The Open University turns 50

Meeting thousands of graduates during her time as Chancellor of The Open University, Baroness Betty Boothroyd says having this role at the OU “was a great privilege and something I really enjoyed.”

She attended many of the OU’s degree ceremonies, which she described as “a most moving experience”, and in her maiden speech to The House of Lords in 2001, she spoke warmly about the graduates she met:

“Many of them are very young and they get through their studies in record time, and many are more mature and their studies take them a long time. There are housewives, people with full-time jobs, people with homes to look after, people with children to bring up and people who have to take time off to look after elderly relatives. Many come to me on the platform and whisper, ‘it took me six years to get here, but I did it in the end and this is my proudest day.’”

As The Open University celebrates its 50th anniversary, Baroness Boothroyd has a new message of support for all of today’s students:

“I do say to all those people, whether young or old – if you fall back, if you get a slap across the face, pick yourself up and carry on. It took me some years, and it took your predecessors in the OU many years to get through – but they did it in the end, and you will too. So good luck to you all!”

Baroness Boothroyd was the OU’s fourth Chancellor, from 1994-2006, and the first woman to hold the role. From 1992 to 2000 she served as Speaker of the House of Commons and sits as a Crossbench peer in the House of Lords. 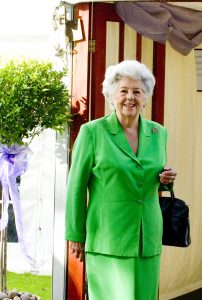 Baroness Boothroyd said in her maiden speech to the House of Lords that she identified with the persistence of Open University students:

“I associate myself with so many of them because I too was a slow starter. It took me five parliamentary elections and 16 years to reach Westminster. My best friend said that I could have qualified as a brain surgeon in that time, and my second-best friend said ‘she ought to pack it in.’”

That persistence and determination was evidenced in the corridors of Westminster, as Baroness Boothroyd recently recalled her interactions with the Department of Education at that time:

“What I didn’t enjoy was having to wear out the carpets of the Department of Education for money. The Department for Education at that time thought all the students who were in employment had their fees paid by their firms. What a lot of tommyrot! It took a lot of pressure to let them know that in a lot of cases this just wasn’t true. But I enjoyed this to some extent because I liked challenges.”

A pioneer in higher education

In her maiden speech to the Lords in 2001, Baroness Boothroyd was passionate about the importance and impact of The Open University, saying:
“The difficult birth of The Open University illustrates the narrow line that sometimes exists between success and failure in our approach to education policy…Had it been allowed to go under in its early years, we would have lost an academic institution that has pioneered new ways of higher education, stimulated thousands of people to become learners and which is admired and emulated in many countries.

“Such achievements would not have been possible without the skills and dedication of a world-class academic staff, to whom I pay tribute. Nor would it have happened without the determination of its founders, notably my colleague and friend Jennie Lee…

“My point is that when we in this country embrace a worthy cause, nothing can stop us. The Open University is living proof of that.”

Watch a clip of Baroness Boothroyd speaking at her retirement from the role of Chancellor.