Lifelong nature-lover Hugh Fearnley-Whittingstall pursues his fascination with the wildlife of the West Country as he teams up with the region’s most dedicated nature lovers for a new series, produced in partnership with The Open University.  Hugh’s Wild West begins on Saturday 6 January at 6.15pm on BBC Two and runs for twelve episodes.

Amateurs are contributing to conservation

Dr Andy Morris, senior lecturer in geography at The Open University, was the academic consultant for the series. He said:

Free booklet to go with the series from the OU

“This series captures the enthusiasm of people involved in wildlife observation and conservation projects, many of whom are not scientific ‘experts’ or conservation professionals. Many of these stories cover people making significant wildlife observations and collecting data in their own gardens or in their local area, and this speaks to a growth in ‘citizen science’ – where dedicated amateurs are making a significant contribution to conservation work through the volume and detail of the data they collect.”

“A number of factors  have led to this growth – the popularity of programmes such as ‘The Watches’ (Springwatch, Autumnwatch, etc), mass observation projects such as the RSPB’s  Big Garden Birdwatch , as well as an increasing amount of affordable wildlife watching technologies such as nest box cameras and bat detectors. In this sense the series should be a very direct source of inspiration for viewers.

“For me the particular interest is in the way these animals are influencing their observers too – shaping their day to day practices and rituals and creating new social formations, such as the mass groups of people turning out to watch starling murmurations (mass gatherings of starlings which create huge aerial spectacles before they go to roost during the winter months).”

To accompany the series, The Open University has produced a free booklet and bookmark, ‘Understanding Nature, Landscapes and Lives’, with ideas for how to create your own garden wildlife habitat.

In this series, filmed over an entire year, Hugh joins forces with the people working to celebrate and safeguard the region’s charismatic and captivating cast of creatures.   For Hugh it’s a welcome chance to raise his game as a wildlife enthusiast, learning as much as can while sharing the joys and rich rewards that come with getting closer to nature.

Inspired by his natural curiosity he sees a new side of some familiar animals and discovers the strange and captivating truth about some of the region’s more enigmatic or surprising wild residents; whether tracking beaver or dormice in Devon, investigating the mysterious world of cuttlefish and dolphins in the sea off Dorset’s Jurassic coast or discovering the secret life of the tawny owl or the long-tailed tit. 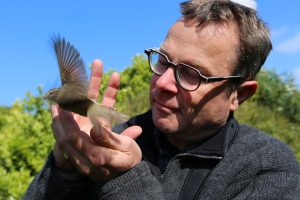 Hugh releasing a bird after it has been ringed

His year-round adventure centres on four of the South West’s most cherished landscapes, Dartmoor with its wooded valleys and granite tors, the unique shoreline and sea life of the Jurassic Coast, the ancient woodland and crystal streams of the Forest of Dean and the wetlands and waterways of the Somerset Levels.

Through the series Hugh experiences for the first time one of the great spectacles of the  wildlife year, the vast swirling flocks of Somerset’s starling “murmurations”, and he encounters the first wild beavers seen in Devon for centuries.  There are exhilarating encounters with dolphins and with Wild Boar, and intimate moments such as getting hands on with a hibernating dormouse and discovering the charming family values of a tiny bird that first captivated him on his garden bird table; the long tailed tit.