OU News
You are at:Home»Education, languages and health»Health»Ed Balls lifts the lid on the care crisis in new BBC/OU co-production

A new two-part programme, Inside the Care Crisis with Ed Balls airs on Monday 8 November on BBC Two at 9pm. Co-produced by the BBC and The Open University (OU), the series investigates the real-world impact of the care crisis, with presenter Ed Balls living and working from St Cecilia’s in Scarborough, a typical family-run care home.

A sector on its knees as a result of the pandemic 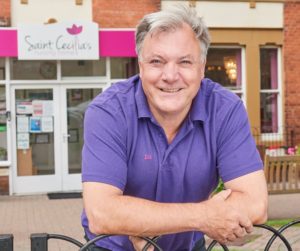 This programme is a personal journey for Balls, whose mother has suffered from dementia for many years and has spent the last three in a care home. He also feels guilty that he failed to tackle issues in the sector during his time in government.

His exploration is timely. After a decade in which £8 billion cuts have been made to care spending, the pandemic dealt a blow which left the sector on its knees. With the government promising to raise money for health and social care through a National Insurance rise, Balls wants to find out about the big issues from the people on the ground.

In the first episode, he looks at what life is really like on the frontline for workers in elderly social care and the people that they serve. Episode two focuses on the time the presenter spent living and working in St Cecilia’s care home in Scarborough. However, with many millions more people being looked after in their own homes, Balls also turns his attention to domiciliary care.

Mary Larkin, Professor of Care, Caring and Carers at the OU and one of the academic consultants on the programme, commented:

“As academic consultants, we used our expertise to advise and shape production of the programme. I was particularly interested in contributing because of my background in health and social care and my key research areas being the care of vulnerable groups, such as the elderly and family carers. It’s been a rewarding experience to be involved in the making of this series and I hope it will help to raise awareness of the care crisis in the UK.”

The second OU academic on the programme, Dr Jerome De Henau, Senior Lecturer in Economics in the Faculty of Arts and Social Sciences, provided his insight into the political economy of care systems and the gender inequalities of care provision.

Episode one airs on BBC Two at 9pm on Monday 8 November, with episode two airing at the same time the following week (Monday 15 November). Both episodes will also be available to watch on BBC iPlayer.

This series was commissioned by Broadcast and Partnerships and is supported by Faculty of Wellbeing, Education and Language Studies and  the Faculty of Arts and Social Sciences, with particular relevance to:

Visit the OU’s Broadcast and Partnerships site to find an exclusive interview with Ed Balls, reflecting on his experiences exploring the care crisis.